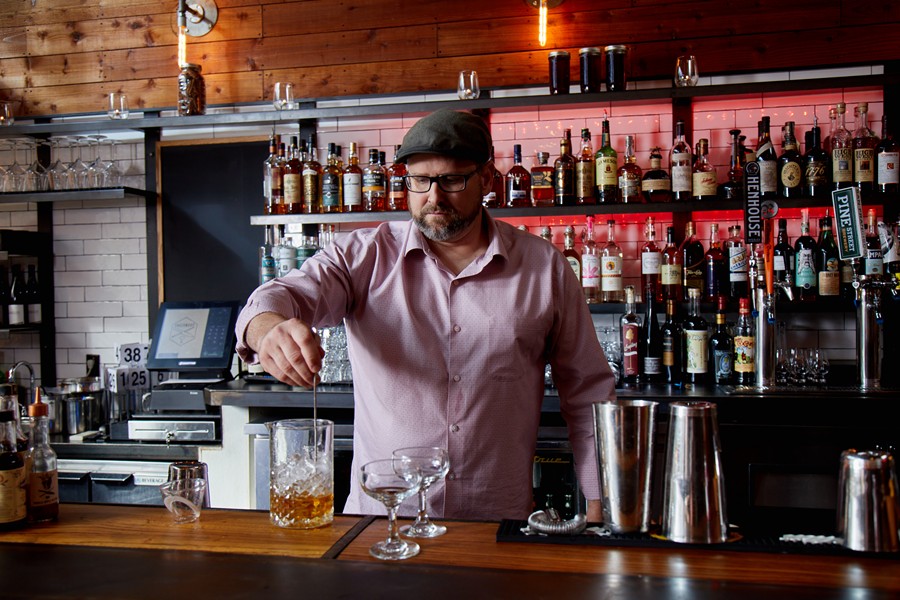 Jack Kerouac owned an Underwood typewriter. As a huge fan of Kerouac and other beatnik writers, Christopher Parks was thrilled to buy North Oakland’s Cafe Underwood and turn it into Bar Underwood. “I really wanted to celebrate the idea that this is named after a classic typewriter,” he said, explaining his goal to slowly “transition to a 1920s Paris, Hemingway hangout.”

But for the past couple of months, customers kept assuming Bar Underwood was still Cafe Underwood. The staff changed, the food changed, and the espresso machine departed, and regulars were displeased. Parks realized he and his business partner Stacy Vella needed to change the name and truly define their efforts. Now, Bar
Underwood is Bar 41 (308 41st St.).

Among the changes: 29 wines by the glass, a dozen signature cocktails, and an expanded selection of scotch, rye, bourbon, and gin. The food program is still in a state of transition, as the team’s initial chef, Adam Hinojosa, recently left. Parks, Vella, and Hinojosa all opened Per Diem and Noir Lounge in San Francisco together.

While Hinojosa was passionate about classic French charcuterie, Parks said that never really found an audience with the neighborhood. Instead, Parks plans to move toward American comfort food, including light bites that pair well with a glass of wine. (Parks is also a sommelier.) In the future, Bar 41 will also open for lunch with sandwiches, soups, salads, and cheese and charcuterie boards.

“One of my main motivations is to be this bridge between a dive bar and a fine dining restaurant. I want you to come hang out and have an amazing glass of wine, stay until late or eat some amazing soul food,” he said, referring to Bar 41’s new soul food pop-ups going down every Sunday night.

Parks also has big plans for the space itself. Underwood already had a nice patio, but Parks wants to add flowers and vines and make it feel like a true garden space. Eventually all the old furniture will go, while the redwood, steel, and brick will stay. He wants to turn the mezzanine bar into a library and generally create a “rich, old, classic den, library feel.”

"We have so much we want to do,” he said, laughing. “It’s going to take forever.”

Once the mezzanine is done, he imagines hosting classes, tastings, and other events there. That might look like pickling workshops or winemakers coming in to create a typical tasting room experience. Since Bar 41 has a retail license, folks will be able to buy bottles to go, too.

“There’s such a strong community here in Oakland,” he said. “I just want them to know they have one more option. It’s a declared safe space, trans inclusive.”