1) Smart Alec’s Intelligent Food (2355 Telegraph Ave.), a Cal campus institution for twenty years and a forerunner to today’s ubiquitous healthy-fast-food restaurant genre, has closed due to a rent increase, the Daily Cal reports. But, as Berkeleyside Nosh reports, students didn’t have to wait long to find out about what some might consider to be a more exciting replacement: the first East Bay location of Super Duper Burgers, a well-regarded San Francisco-based burger chain.

2) Berkeley Social Club (2050 University Ave., Berkeley), the new Korean-fusion restaurant that replaced Perdition Smokehouse, has quietly opened for business, a poster on Hungry Onion reports. According to Berkeleyside Nosh, the restaurant serves a mish-mash of traditional Korean dishes (Korean fried chicken, kimchi fried rice) and American diner fare with Korean influences. It appears that the beer list is rather pared-down and less ambitious compared to the Perdition days, however.

3) Eater reports that Fort Green (736 Washington St.), the sports bar from the folks behind Drexl, has opened with a food menu that was created for the bar by Nick Balla and Cortney Burns, the high-profile San Francisco chefs who recently departed from Bar Tartine. A version of Balla’s famous chicken wings are on the menu, as are a fried and smoked potato flatbread and a couple of different ice cream sandwiches.

4) Berkeleyside Nosh wrote a retrospective on Caffe Mediterraneum (2475 Telegraph Ave.), which has new owners and will undergo a major remodel. Whether the new management will try to maintain the cafe’s identity as a kind of funky, beatnik hangout is very much an open question. 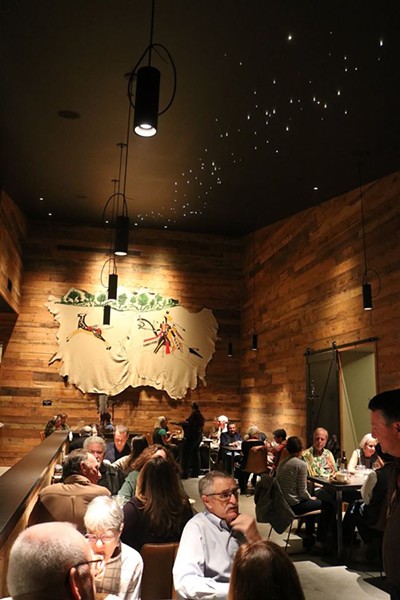 6) As a Bay Area media person with opinions on “cooking other people’s food,” I make a cameo appearance in this Chronicle story about Werowocomoco, Francis Ford Coppola’s Napa valley Native American-themed restaurant, where wine-country daytrippers can dine on such “American native” dishes as bison burgers (on acorn buns), fry-bread sashimi tacos, and pine ice cream. Yes, this is very much a real thing.

7) Finally, ICYMI, I wrote about Cosecha’s owners’ plans for a new restaurant in the old Dimond Firehouse, and where you should buy pie for Thanksgiving.