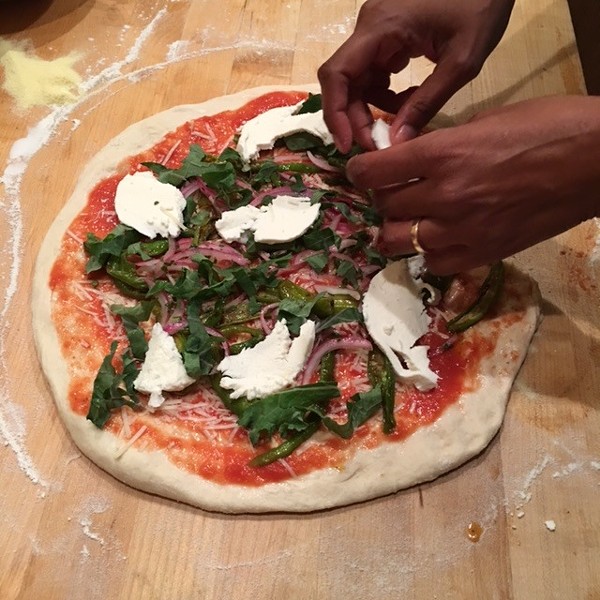 1) If you are a fan of Juhu Beach Club and have perhaps hoped that the stylish Indian restaurant would stay open all day, or that chef Preeti Mistry would try her hand at making pizza or breakfast pastries — well, I have good news for you: Earlier this week, Mistry announced that she and wife/business partner Ann Nadeau are opening a new all-day cafe-restaurant called Navi Kitchen in Emeryville’s Triangle neighborhood, at the former Basic Cafe spot (5000 Adeline St.). The basic concept will be American cafe-style foods reimagined with Indian flavors: rotisserie chicken with a burnt masala brine, pizza with toppings like chaat masala frying peppers, and tikka masala mac and cheese — plus an assortment of housemade biscuits, quick breads, and other baked goods.

The headliner will probably be the pizza, which Mistry describes as “Indian Neapolitan.” You may be familiar with the “Indian pizza” restaurant genre, which has been somewhat of a phenomenon for a while — it’s a natural fusion dish if you consider the similarities between pizza dough and naan. When reached by phone, Mistry explained that these Indian pizzas generally tend to feature that puffy, all-American, Papa John’s style of pizza crust, which then gets weighed down with dozens of different toppings. Mistry said her pizzas will be closer to the Italian Neapolitan style in terms of size and shape, and the toppings will be more “subtle” — more along the lines of what you'll find at California-style places like Pizzaiolo or Arizmendi. The dough itself will be a hybrid: Mistry uses Italian “00” flour, but replaces the olive oil with a mixture of yogurt and ghee.

Navi Kitchen will be a casual, counter-service restaurant with lots of outdoor seating — the idea is for it to be very kid- and family-friendly, Mistry said. One more notable feature: There will be a “spice bar,” where customers can buy freshly ground spice blends such as garam masala and chai masala. The restaurant’s ETA is February or March of 2017.

2) Berkeleyside Nosh notes that the former Chowhaus (6118 Medau Pl.) location in Oakland’s Montclair neighborhood appears to have a new tenant — a Thai restaurant called Daughter Thai Kitchen. This appears to be a placeholder website for the restaurant, but nothing else is known at this time.

3) The owners of Doña Tomas and several other East Bay eateries have severed their partnership, splitting up their restaurant mini-empire, Berkeleyside Nosh reports. Dona Savitzky will continue to operate Doña Tomas and Tacubaya; Thomas Schnetz will run Flora, Fauna, and Xolo.

4) If you’ve been feeling nostalgic for Nellie’s Soulfood Restaurant, which closed earlier this year, this episode of the podcast East Bay Yesterday is worth a listen. The entire episode is centered on an extended interview with legendary chef-owner Nellie Ozen herself.