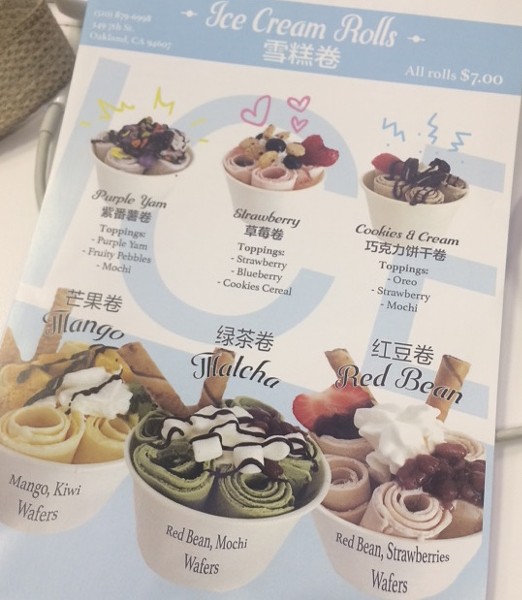 1) Oakland Chinatown is home to what appear to be the first Thai-style ice cream rolls to hit the East Bay. Freezing Point Creamery (349 7th St., Oakland) opened for business earlier this week with a menu that also features smoothies, regular ice cream, and “healthy cleanse detox juices.” But the rolls will be the main attraction. They’re made by pouring the liquid ice cream base onto a very cold grill-pan, which quick-freezes the mixture. The thin layer of ice cream that forms gets scraped up — like rolling up a carpet — and placed in a bowl with various toppings.

Here's a video that shows the whole process. It’s very satisfying to watch!


At Freezing Point, the ice cream rolls are $7 an order — $6 during the grand opening promotion period. Flavors run the gamut from Matcha to Cookies & Cream.

2) Have you been wondering what happened to the Halal Guys location in Berkeley (2126 Center St.), which has been rumored to be “opening soon” for close to a year at this point? According to Inside Scoop, the franchise is still looking for investors, which it is now seeking through the restaurant crowdfunding platform EquityEats. Those of us hoping to get our Halal chicken-and-rice fix will have to be patient for a little longer: It sounds like the plan is to open by the end of the year.

4) The latest buzz in the coffee world: Last week, Oakland-based Blue Bottle Coffee announced its “Perfectly Ground” line of ready-to-brew ground coffee. According to a press release, the product relies on a proprietary process that “hermetically seal[s] the flavor and freshness of just-ground coffee.” The price of the Perfectly Ground coffee, which is available in all Blue Bottle cafes as of yesterday, is $17.50 for five single-serving packets. If you’re doing the math at home, that comes out to $3.50 per cup of coffee.

6) Finally, ICYMI, I tried some mochi muffins in Berkeley that had me feeling unexpectedly nostalgic.