Many Bay Area residents pride themselves on their enlightened stances on the urgent sociopolitical issues of our times. But when it comes to how the local restaurant industry treats its workers, it seems the Bay Area is no better than the rest of the country. And in some cases — most strikingly, in the way that fine-dining restaurants pay employees of color — it might even be quite a bit worse.

That’s according to a recent report released by the Restaurant Opportunities Center (ROC), a national nonprofit organization that advocates on behalf of restaurant workers. Among other problems, the study found that wage violations such as tip theft were rampant; that more than half of the restaurant workers surveyed hadn’t received a raise or a promotion in the past year; and that — no surprise — exorbitant Bay Area rents posed a significant challenge to restaurant workers, many of whom must commute great distances from the low-income areas where they live.

The study also found evidence of both race- and gender-based wage disparities across the local restaurant industry, but these were especially egregious at fine-dining restaurants — defined, for this purpose, as full-service restaurants that have a typical dining tab of more than $40 per person. The female fine-dining restaurant employees were, on average, paid $3.34 less than their male counterparts — due in large part to their being dramatically underrepresented in the high-paying bartender positions at those types of establishments. The race-based wage gap at fine-dining restaurants was even larger, as workers of color earned a whopping $6.12 less than white workers on average. According to ROC, this is the largest race pay gap that the organization has found in the entire country.

The ROC report was based on 525 surveys completed by current Bay Area restaurant workers, as well as a smaller number of structured interviews with restaurant workers and employers. The organization hailed its study as one of the largest to date on the Bay Area’s restaurant workforce, but all of the usual disclaimers about small sample size apply here.

That said, in the face of such an unflattering portrait, it seemed fair to ask a few Bay Area restaurateurs what they plan to do to address some of these issues — and what they’re doing already.

For Jay Porter, the chef-owner of The Half Orange, many of the problems boil down to the pay gap between front-of-house and back-of-house employees — an issue that many restaurateurs brought up when Oakland instituted its recent minimum wage increase. Because generally only FOH employees (i.e., servers and bartenders) benefit from tips, they sometimes earn two or three times as much as kitchen workers. This disparity has a disproportionate impact on people of color, given the preponderance of Latino line cooks and other kitchen staff — and the fact that, at many restaurants, the FOH workers tend to be overwhelmingly white.

“Like all parts of society, there’s definitely structural racism and sexism [at restaurants]. But if front-of-house and back-of-house wages were even industry-wide, it would go a long way to reducing the racial income disparity,” Porter said.

Porter explained that at The Half Orange, he has instituted a service charge in lieu of tipping, allowing him to distribute that revenue to both FOH and BOH employees. Other restaurateurs — for instance, Sal Bednarz, who owns Actual Cafe and Victory Burger in North Oakland — use various tip pooling policies to achieve similar ends. Still others have eliminated tipping altogether.

Ultimately, Bednarz said, the biggest limiting factor for restaurateurs like him, who want to do right by their workers, is how much he can raise prices to pay for those changes.

“I don’t want to be in a position of having to defend a broken restaurant model, based on low-wage labor,” Bednarz said. “I’d rather focus on this: If we all want this system to change, we need to educate our dining public about the real costs involved in doing right.”

Of the chefs I spoke to, only one, Homestead chef-owner Fred Sassen, rejected the entire premise of the ROC study — this notion that, for instance, institutionalized racism is responsible for wage disparities. According to Sassen, the ROC study is “trying to hold the restaurant owners accountable for everything, and it isn’t holding the employees accountable for anything.” And he pointed out that his highest-paid server at Homestead is a woman from Mexico who speaks fluent English and studies wine on her days off. “The reason she makes the most money is because she’s the best server,” Sassen said. “It has nothing to do with race.” 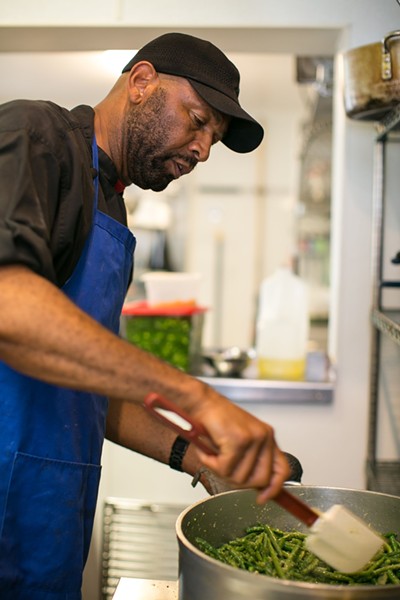 But Nigel Jones, the chef and co-owner of Kingston 11, argued that restaurant owners need to take it upon themselves to do more to give people opportunities.

“The restaurant industry isn’t different from America itself,” Jones explained. “People hire people who look like them.”

Part of the reason that Kingston 11 has one of the most diverse staffs, both front- and back-of-house, in Oakland is because the people doing the hiring — the owners and managers — are people of color themselves, Jones explained. And he said that it isn’t enough to just equalize wages between FOH and BOH while maintaining what the ROC study calls “occupational segregation.” Even if the pay were the same, the FOH employees have access to more opportunities — at Kingston 11, that might mean they’re hobnobbing with people like City Council President Lynette Gibson McElhaney, a regular customer. And a diverse front of the house also means that a more diverse range of customers will feel comfortable dining at the restaurant.

As Jones put it, “People like to go places that reflect positively on them.”