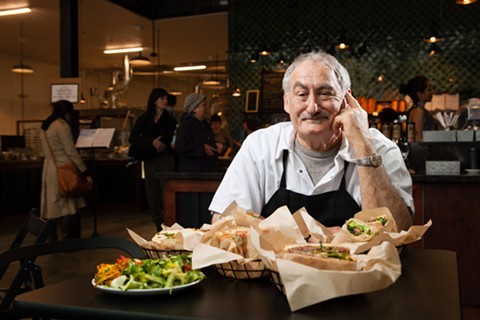 East Bay sandwich lovers got some unpleasant news over the weekend, as Jeff Mason, the sandwich-maker-in-chief at Uptown Oakland's Pal's Take Away, tweeted this brief announcement on Sunday morning: "To all Pal's pals: as of right now Pal's is no longer making sandwiches at Firebrand in Oakland."

When reached by phone this morning, Mason confirmed that his collaboration with Firebrand Artisan Breads (2343 Broadway, Oakland) has ended, citing what he described as a mutual parting of ways with Firebrand owners Matt Kreutz and Colleen Orlando. Mason had been running his popular lunchtime pop-up deli as a kitchen within a kitchen at the Firebrand bakery since last November.

"I have nothing but kind things to say about Matt and Colleen," Mason said. Ultimately, he said, Kreutz and Orlando are moving the business more in the direction of being a full-service restaurant, with brunch and dinner service, plus a full-on catering operation on top of that.

While his departure from Firebrand was abrupt, Mason is hoping it won't be too long before Pal's finds a permanent home. His hope is to open a small brick-and-mortar deli of his own somewhere in Oakland or Berkeley — small enough that he can actually work the counter himself and get to know the people in the neighborhood. "I’ve had enough runs in other spaces," he said.

In the meantime, Mason is planning a series of pop-ups. The first one — a hot dog themed dinner called "Pal's Take Away Goes to the Dogs" — will take place at an as of yet undisclosed location in Berkeley sometime in the next three or four weeks.

Meanwhile, I reached out to Kreutz and Orlando, but haven't heard back as of this posting. I'll post an update if I get any information about Firebrand's plans moving forward.