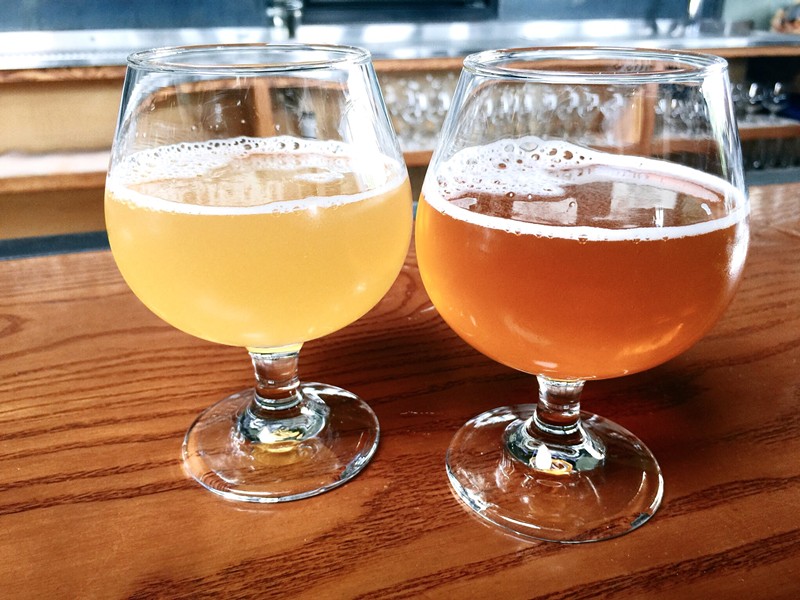 It was an elbow-to-elbow, standing-room-only, three-deep-at-the-bar crowd when I arrived at Hog’s Apothecary last evening just before 6 p.m. The occasion: The debut of two beers from Temescal Brewing.

See also:
How a North Oakland Brewery Became a Hub for Local Artists Before It Even Opened

The brewery, which attracted attention with its Kickstarter campaign, won’t open its beer garden and facility at 4115 Telegraph Avenue to the public for another month or two. But a couple pale ales were on draft last night at this very New Oakland event. And, be assured, the beers were solid.

Pale ales are a style that new-guard breweries often neglect. Or, when they do brew them, they're seldom well-executed. Consumers also bypass pales for higher-booze hoppy options, and so they don’t land on draft lists as frequently as they should.

The two pales last night — called Happy Birthday (left, see photo above) and Hello — were tremendous. Both, for lack of a better word, were new-school beers: gently bitter, juicier in body, dry, and with pleasant citrus character.

Hello was copper and, in the glass, appeared as an old-school pale (think Sierra Nevada). The trademark pale-ale bitterness, however, wasn't there; this one was soft and earthy, which I love. Happy Birthday was also a light-bodied and crushable brew, with a subtle papaya aroma and mild lemon flavors. It was hazy, but not a yeast bomb. Neither boasted any unwelcome sweetness.

I’d wager that Happy Birthday was the more popular of the two, although both kegs kicked well before the 7 p.m. I’d hoped to track down and chat with brewer Wade Ritchey and owner Sam Gilbert, but they had to run around the corner to snag more kegs.

Before leaving, Gilbert did say quickly that he hopes to open Temescal by June. Good: These were high-quality hoppy ales, in the tradition of Cellarmaker, and offer yet another reason to celebrate the Bay's brew scene.