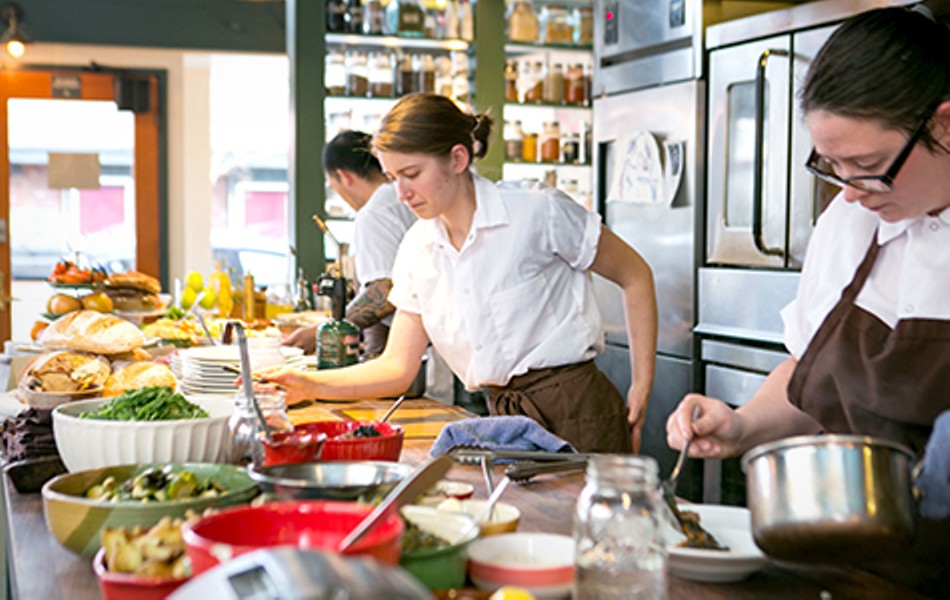 At restaurants around the country, it has long been common practice for servers to "tip out" at the end of a shift, giving a cut of their tips to the bussers and bartenders — and, often, to the back-of-house kitchen employees, such as the line cooks and dishwashers. After all, one good turn deserves another, and for a waiter whose tip is often tied to the timeliness and skill of the kitchen team, it only seems decent to spread the wealth.

The backdrop for all this is a growing sense, industry-wide, that there is an untenable pay disparity between front-of-house and back-of-house employees at restaurants. For my February 18, 2015 cover story, "The Tipping Point," which examined the effect of Oakland's then-looming Measure FF minimum wage increase on local restaurants, restaurateurs told me it wasn't uncommon for a server to make more than three times as much as a typical line cook, once tips were factored in. The minimum wage increase, which primarily benefited servers (who make minimum wage plus tips), only exacerbated that disparity.

At the time, a number of Oakland restaurateurs, including Sal Bednarz (Actual Cafe, Victory Burger) and Preeti Mistry (Juhu Beach Club), said the minimum wage hike would likely lead them to be even more aggressive in their tip-pooling policies, as a way to make sure that cooks and dishwashers would also reap some of the rewards of the change. In an email, Bednarz said he found the court ruling "worrisome" and that it likely pushes him "one step closer to tipless service" — though he still has deep reservations about how successful that would be at counter-service restaurants like the ones he runs. Meanwhile, Jay Porter (The Half Orange, Salsipuedes) said that while he believes the federal court ruling will eventually be overturned, he is thinking about instituting a 20-percent service charge in place of tips for the time being.

Of course, one of the reasons the tipless movement still hasn't taken off in the Bay Area is because it is not without its challenges — most notably, in terms of retaining experienced waitstaff. Homestead's Liz Sassen acknowledged that the restaurant lost almost its entire front-of-house staff in the immediate aftermath of the change — an understandable development, given that a server might make $10 or $15 more an hour with tips at another restaurant nearby. And even now, she has trouble hiring the most experienced servers, who know they can make a lot of money pulling in big tips. Instead, the restaurant's new approach is to hire less experienced workers and simply give them a lot of training up front.

But Sassen said she has no regrets: "I can look my line cooks in the eye and know that they're getting a fair cut," she said. Since replacing those initial departees, the restaurant has had almost zero staff turnover — a product, Sassen believes, of an improved staff culture. And, of course, the restaurant is unaffected by any current and future legal rulings related to tipping.

Many restaurateurs have talked about how difficult the minimum wage increase has made it to do business. She said she wants them to know that, with the tip-free model, "We're not struggling that badly."

Ultimately, though, Sassen believes that even with the court ruling, most restaurants will just continue to do what they're doing. Indeed, at Juhu Beach Club, Mistry said that she feels comfortable continuing her tip-sharing policy because it isn't strictly mandatory. Upon hiring, all of her employees are made to understand that the expectation and the culture of the restaurant is for servers to give some cut of their tips to the back of the house. But the servers are free to decide exactly how much on their own, and Mistry herself never touches their tip money.

That said, Mistry believes that the tip-free model will eventually become the norm. "I look forward to being part of it," she said.