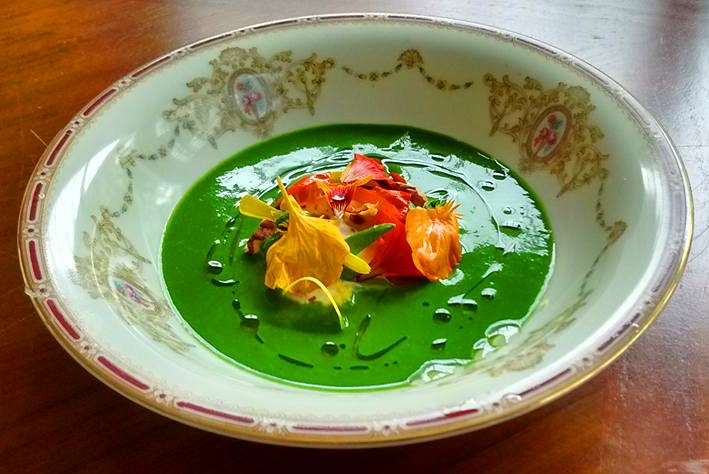 They call themselves “journeymen,” a term meant to evoke the old European tradition of craftsmen wandering from town to town in order to build up their skills — or, for baseball fans, the utility infielder who’s been around the block a few times.

Even though chefs Jonathan Tu and Chris Wolff are just 32 and 29 years old, respectively, they say they’ve both cooked professionally for pretty much the entirety of their adult lives. Now, Tu and Wolff are the proprietors of “Journeymen,” a new monthly pop-up dinner at Temescal’s Blackwater Station (4901 Telegraph Ave., Oakland) that the two Oakland residents hope will eventually morph into a restaurant of their own.

The next pop-up will be a $55 four-course prix-fixe on Monday, December 7, with seatings at 6:30 and 8:30 p.m. Dishes will include grilled Hokkaido squid, a nasturtium and burrata soup, dry-aged chuck steak with marrow, and salted persimmon ice cream — plus a couple of snacks to start, bread and butter, and coffee and petit fours at the end. Blackwater Station’s full selection of cocktails will also be available.

The basic approach here is that of a modern Californian tasting menu, though Tu said that he and Wolff wanted to avoid doing the kind of long-format, twelve- or fifteen-course marathon dinners that you’ll find at the highest-end restaurants that serve this type of cuisine — an hour-and-a-half- rather than a three-hour-long meal. And the chefs are also less shy about embracing modernist cooking techniques — emulsions and immersion circulators and such — than the more rustic Cal-cuisine eateries that still dominate the East Bay.

“When they invented the stove a long time ago, people who were cooking over a campfire were like, ‘What is this new technique? We don’t need it,’” Tu quipped.

Still, Tu said the dish he cited as his favorite from the pop-up menu — the puréed nasturtium and burrata soup — was meant to be a comfort-food dish, highlighting the creaminess of the burrata and the pepperiness of the nasturtium. Shallot-like daylily bulbs, foraged from around Lake Merritt, and pumpernickel crackers seasoned like an everything bagel complete the dish. The overall idea, Tu said, is for each dish to be an explosion of concentrated flavor.

If the last dinner that Tu and Wolff collaborated on — in June, at the Hopscotch Annex in Uptown Oakland — is any indication, the Journeymen pop-up might sell out quickly. At the time, Tu was the sous chef at Rich Table, and Wolff was cooking at Bar Tartine. The pedigree of those two prominent San Francisco restaurants likely contributed to the enthusiastic turnout. But according to Tu, what the two really want is to open a restaurant in Oakland. So, in September, they both quit their jobs and took gigs working at restaurants in the East Bay — Wolff at Blackwater Station and Tu at Berkeley’s Iyasare. They both work the day shift so that they can concentrate on their pop-up venture, and their prospective Oakland restaurant, at night.

“We both agreed this is an easy place to fall in love with,” Tu said.