The Future Is Here: Draft Beer Delivered to Your Doorstep 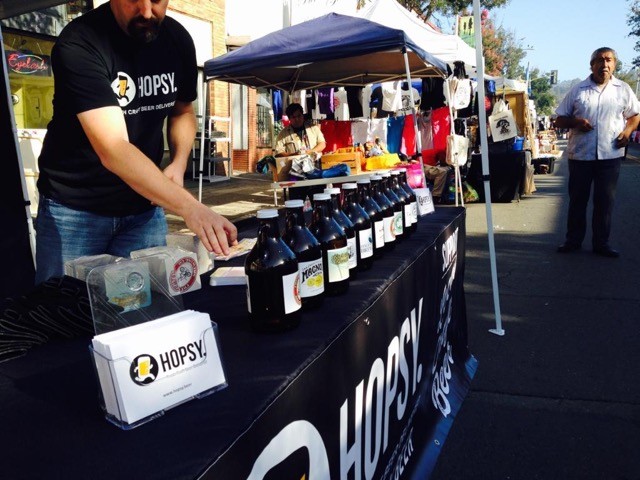 Imagine a world where, with a simple tap of your smartphone, you could summon a jug of your favorite craft beer to your doorstep, to be enjoyed at your leisure in the comfort of your own home. For the beer lover, this — more than the self-driving car or the face-mounted computer — is the dream of the future.

Now, thanks to Hopsy, an Albany-based delivery service that’s set to launch in November, the future is upon us. Founded by Sebastien Tron, Andrew Perroy, and Bodie Paden, Hopsy touts itself as the country’s very first app-based and online delivery service for growlers — i.e., to-go containers for draft beer — allowing customers to have draft beers, some of which might not even be available in canned or bottled form, delivered from the brewery directly to their home. Initially, Hopsy will only offer delivery to the East Bay, but will eventually expand its service to San Francisco and the North Bay.

In addition, the company’s brick-and-mortar Albany storefront at 1137 Solano Avenue will be the Bay Area’s first growler store, where customers can buy pre-filled containers of draft beer from a selection of local craft breweries.

Tron believes the service will be a game-changer in terms of making draft beer more accessible to the person who wants to drink it at home. The modern-day growler — a big, reusable jug, often made of dark glass, that’s used to transport and store draft beer — has been around for several decades, but for the most part, it’s an innovation that the casual beer drinker rarely uses. That’s because it’s a bit of a hassle: You have to figure out which brewpub has a growler station, or, if you want the freshest beer, you have to drive to the brewery itself. You have to procure a growler to begin with, of course, and then you have to figure out how to clean it, and navigate state regulations about labeling it properly.

But Tron said the demand is definitely there, as evidenced by the fact that, despite the hassle, a typical brewery might wind up filling about 2,000 growlers every month. How many more might get filled if a customer could do so without even getting up from his or her couch?

Other companies have attempted to launch similar services in the past, including a Seattle startup with a subscription-based model that ended up folding last year. Tron believes Hopsy will succeed where past efforts have failed in part because the craft beer industry has exploded, particularly here in the Bay Area, meaning the company can offer beers from a much greater number of breweries without having to have its drivers travel unreasonable distances.

New technology now also exists that can support this kind of service — for instance, CO2-powered pressurized growler-filling technology that allows the beer to stay fresh for an entire month instead of just a week or two. Even more importantly, the advent of companies like Caviar and other food delivery services mean that user-friendly platforms have already been created that make seamless what would otherwise be a logistically daunting transaction.

Hopsy’s opening roster will include East Bay breweries such as Ale Industries (Oakland), Alameda Island Brewing Co. (Alameda), and Cleophus Quealy (San Leandro), as well as several other standouts that are located a little farther afield — Magnolia Brewing in San Francisco, FreeWheel Brewing in Redwood City, and Moylan’s Brewery in Novato, for instance. All told, the company will offer a lineup of draft beer from ten different Bay Area breweries, with more to be added later on, Tron said.

Like many such services, Hopsy will make money by taking a cut from both the buyer and the seller: Breweries will offer their beer to the company at wholesale rates while customers wind up paying a couple dollars more for each 32-ounce growler than they would if they went to the brewery themselves. One big perk is that by not going through a traditional distributor — like, for instance, Safeway — more of the money from a customer’s purchase actually goes to the brewery.

One caveat: Hopsy isn’t yet an on-demand service. Unlike with comparable services such as Uber (for cars) or Caviar (for food), a customer can’t simply tap a button and expect that growler of fresh beer to show up at his or her doorstep within the hour — at least not for now. Instead, Hopsy customers will have until the end of the workday on Mondays to put in an order. To start out, the company will deliver growlers on Thursdays and Fridays.

But the goal, Tron said, is to offer next-day draft beer delivery, and, eventually, same-day delivery. Once that becomes a reality, how much further away are we from that Jetsons-like future of instant gratification via pneumatic tube?