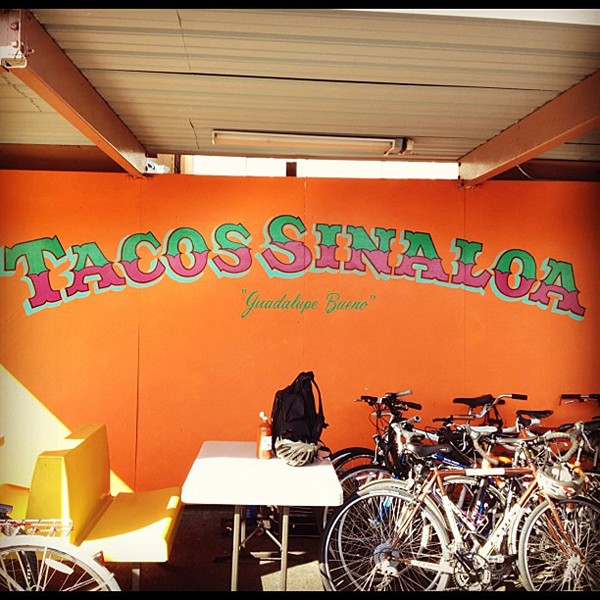 1) Tacos Sinaloa, a trio of popular taco trucks in East Oakland, will soon open a new brick-and-mortar taqueria near the Cal campus, at 2384 Telegraph Avenue in Berkeley, Inside Scoop reports. Winner of multiple Best of the East Bay “best taco truck” titles, Tacos Sinaloa is nothing if not versatile: One of the trucks is a good bet for cabeza, carnitas, and other meaty lonchera standards; another specializes in seafood; and I’ve been told, but have yet to personally confirm, that Tacos Sinaloa’s vegan tacos are some of the best around.

Given the new brick-and-mortar restaurant’s use of the shrimp logo from the seafood-centric truck, it seems a safe bet that shrimp tacos, seafood cocteles, and other fruits of the sea will have a prominent place on the Berkeley menu. No word yet on an exact opening date, but it sounds like the owners are shooting for sometime later this month.

2) The Oakland location of Whole Foods Market (230 Bay Pl.) finds itself embroiled in controversy after a security guard assaulted a Black customer last Thursday night, according to a witness who later posted photos of the bleeding victim on Facebook, SF Weekly reports. KQED News subsequently reported that Whole Foods has fired the security guard in question and is no longer retaining the services of Admiral Security Services, a Concord-based firm. The Oakland Police Department has said that it is investigating the incident.

3) Mockingbird (1745 San Pablo Ave., Oakland), the casually romantic California bistro in Uptown Oakland, is moving to a “new nest” at 418 13th Street — the former location of a Vietnamese restaurant called Ba Vo. The move isn’t slated to take place until the spring of 2016, but on Sunday, September 13, owners Melissa Axelrod and William Johnson are hosting an open house at the new space, with small bites and wine, from 6:30 to 8:30 p.m. RSVP to reservations@MockingbirdOakland.com. One advantage of the new spot: The plan is to have a full liquor license so that Mockingbird can start serving alcohol again for the first time since last fall. 6) Alice Waters, Chez Panisse owner and Cal-cuisine pioneer, is one of ten honorees that President Barack Obama has chosen to receive a 2014 National Humanities Medal, Eater reports. She’ll receive the medal at a White House ceremony on Thursday, September 10.

7) A few notable pop-ups this weekend: Oakland-based Steep Tea Co — in the midst of a Kickstarter campaign to launch its mobile tea truck — will do a brunch pop-up at the Ordinaire wine shop (3354 Grand Ave., Oakland) from 9 a.m. to 1 p.m.

9) In case you missed it: a tour of Black- and Latino-owned wineries, and Cafe Van Kleef's beloved owner has died.