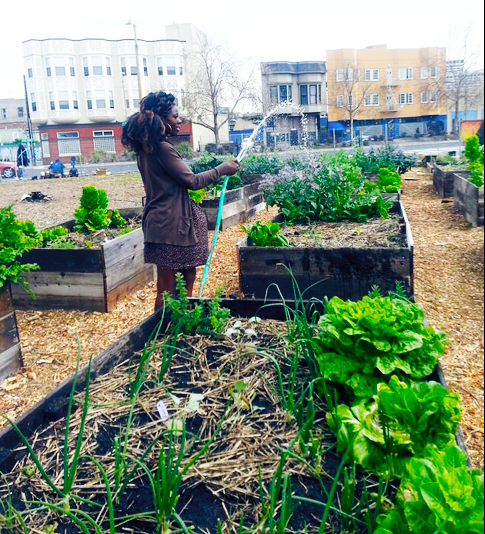 A community garden in West Oakland is the latest battlefield in the war against gentrification, according to activists who built the garden and have vowed to defend it.

Built over a period of several months, the Afrika Town Community Garden sits in what its organizers say was a dilapidated, needle-strewn lot at the intersection of West Grand and San Pablo avenues. Since it officially launched last month, the garden has served as a community hub, where volunteers serve free community breakfasts and offer free vegetables to anyone who wants them. But now, the volunteers say the owner of the lot wants to destroy the garden so that he can sell the property to luxury condominium developers — and that he plans to come with bulldozers on Friday, April 3.

See also:
The Fight to Develop West Oakland
Why Gentrification Is Not Inevitable

In response, the Afrika Town volunteers have declared April 3 to be Liberation Day. Starting at 7 a.m. and extending on into the evening, they’ve planned a full day of music, food, and guest speakers. Organizers hope at that least two or three hundred supporters will show up to defend the garden, and that the protest would be enough to turn the bulldozers away, at least for now. As of this morning, those on the scene reported that about sixty protesters were on hand, with no bulldozers in sight.

The protest reflects growing worries about gentrification in West Oakland and, in particular, the unease that some residents feel about the city’s West Oakland Specific Plan (WOSP), which aims to attract investment to the neighborhood by developing vacant properties. According to Danae Martinez, an adjunct professor of African-American Studies at Merritt College and several other local universities, the goal of Liberation Day is to reject the underlying message she believes that is often sent to the Black community — that “if we have money, we can just throw you away wherever we want to.” 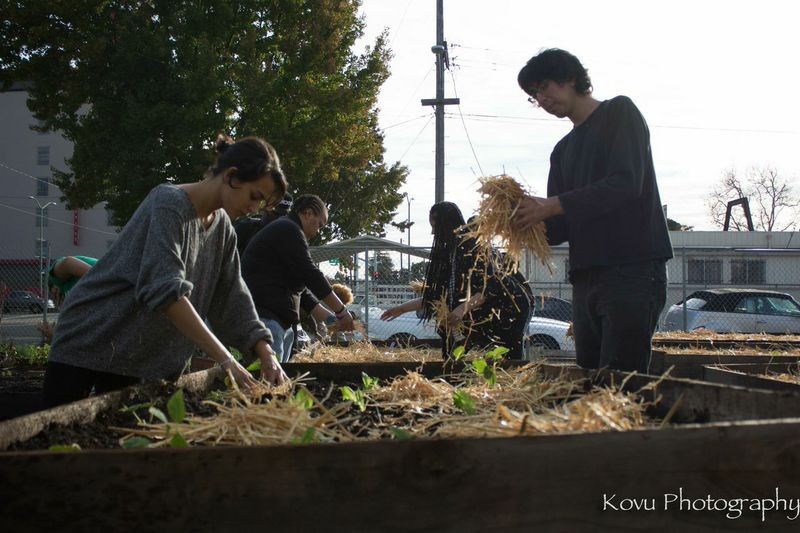 Martinez explained that the Afrika Town garden had its genesis this past November, when she and volunteers at Qilombo — the community center adjacent to the property — decided to clean up the empty lot, which at the time was littered with discarded needles and human feces. With the help of the food justice organization Planting Justice and about a hundred of Martinez’s students, volunteers swept up all of the trash and planted a few initial garden beds. On March 7, they held a second work day to expand the garden, paint a mural, and officially launch Afrika Town.

“Our idea with Afrika Town was to have a place that Black people could say is ours,” said Linda Grant, a Qilombo volunteer. According to Grant, the burgeoning garden now features kale, chard, collard greens, green onions, rosemary, lavender, garlic, three kinds of fruit trees, and three different kinds of lettuces. Volunteers harvest the produce and set up a table outside of Qilombo where anyone can come take some vegetables for free, or community members can simply go into the garden and pick what they want. “There’s no gate, no lock, no nothing,” Grant said.

While supporters say that the neighborhood has rallied around Afrika Town, it’s clear that Noel Yi, the owner of the property, has been less than enthusiastic. I reached out to Yi through his real estate agent and received no response as of this posting. But Gary Robinson, the Coldwell Banker realtor who is handling the 2311 San Pablo Avenue property, explained that Yi wants the garden removed because he intends to sell the lot to developers, who would likely build condos on the site. The property is currently listed for sale for $995,000.


All of this came to a head on Thursday, March 26, when Yi and Robinson showed up at the garden with a bulldozer and several police officers in tow. The ensuing confrontation, part of which can be seen starting at 2:25 in the above video about Afrika Town, culminated in the two sides reaching a temporary agreement: Yi would give the Afrika Town organizers until Friday, April 3 — today — to vacate the premises, giving them time to move the plant beds to another location.

Robinson said he told the Afrika Town supporters, “If you guys want the property, you can buy it.”

Even given that daunting $995,000 figure, Martinez said that’s exactly what she and the other Afrika Town volunteers hope to do — to either raise the money themselves, or perhaps to petition to the City of Oakland to buy the property for them. In the meantime, she said, the garden’s supporters have no intention of leaving.

For Robinson, the matter is straightforward: Yi doesn’t want a garden, and he’s the one who owns the lot. Robinson also denied that the lot has been poorly maintained in the three years since he’s been associated with the property.

But Martinez said everyone in the neighborhood witnessed the poor conditions. Now, she said, the space is revitalized, and all are welcome to come to the garden with no judgment, including drug addicts, sex workers, and other so-called “throwaway people” — many of whom are now eating more vegetables and feeling healthier.

Ultimately, Martinez said, the idea is for the entire block to be Afrika Town, a haven for people of color that, through the work of Qilombo and other grassroots organizations, already includes a bookstore, a bicycle repair shop, community breakfasts, and yoga and meditation classes. It’s an approach that Martinez believes could be a model for other “Afrika Towns” that might spring up around the nation.

“Oakland could be the one to lead the rest of the country on how to beautify and do community revitalization in a real way,” Martinez said.