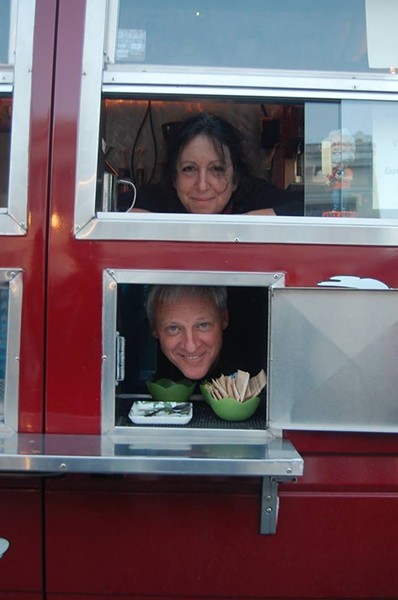 All was quiet on a recent Friday morning on a cozy residential street corner in Oakland’s Maxwell Park neighborhood when a little red van pulled up to the curb, offering early risers what to many groggy-eyed Americans might sound like a dream come true: fresh coffee delivered practically to your doorstep, in some cases before the sun has even risen.


The coffee truck, Get Goes Mobile Cafe, is the brainchild of husband-and-wife owners Jeff and Zeva Williams, who came up with the idea about twenty years ago when they were tasked with packing up orange slices and Capri Sun for their kids’ soccer matches — only to find that no one had brought anything for the grownups. Where was their coffee?

Fast forward to 2011, and the couple finally turned their under-caffeinated moment of inspiration into an actual business. The decision just made sense, Zeva explained. Her husband Jeff had already accumulated thirty years of experience in the coffee industry as a barista and cafe manager, and operating a gourmet food truck was just starting to emerge as a viable way to earn a living in the Bay Area.

The basic philosophy of Get Goes is “getting coffee to where coffee isn’t,” Zeva said. The truck does a fair amount of catering — to office buildings, elementary schools, and, of course, the baseball and soccer fields that were the couple’s original inspiration. Three days a week they do a brisk business selling to morning commuters at the Alameda Main Street Ferry Terminal, many of whom text in their orders ahead of time.

But the Williamses said they were proudest of doing something they say no one else is doing: Starting at around 6:30 a.m. on Friday mornings, they drive their truck through Oakland’s Maxwell Park, Allendale, and Millsmont neighborhoods and sell coffee at about a dozen predetermined stops — often to pajamas-wearing customers who have literally just crawled out of bed. (You can check the company’s Facebook page for an updated schedule for the entire route each week.)

In that way Get Goes aspires to be more like an old-fashioned ice cream truck than your typical gourmet food truck — bringing their product to people at (or at least near) their homes, as opposed to the currently fashionable “food pod” model, where a food truck parks near a bunch of other trucks for several hours at a time. In fact, Zeva said she and her husband originally planned to outfit their truck with the same bells that the classic Good Humor ice cream trucks use — but then realized that non-customers probably wouldn’t appreciate hearing that at 6:30 in the morning. Still, she said, for loyal customers the truck’s approach inspires the same frenzied impulse to scrounge up change from between the couch cushions. And Get Goes’ more popular stops have become real community gathering places, where neighbors meet and converse — often for the first time.

As for the coffee itself, Get Goes offers drip coffee (brewed to order using the same pour-over method you’ll find at any number of reputable cafes) and a full slate of espresso drinks — “anything you can get at a coffee shop,” even if it isn't listed on the menu, Zeva said. The truck also offers homemade blueberry muffins (if you can snag one before they sell out) and coffee milkshakes that are so popular that their customers refer to them as “crack shakes.”

I was tempted to order one — you know, for the sake of journalism — but couldn’t quite justify the sugar rush first thing in the morning. Next time I’ll be sure to indulge.