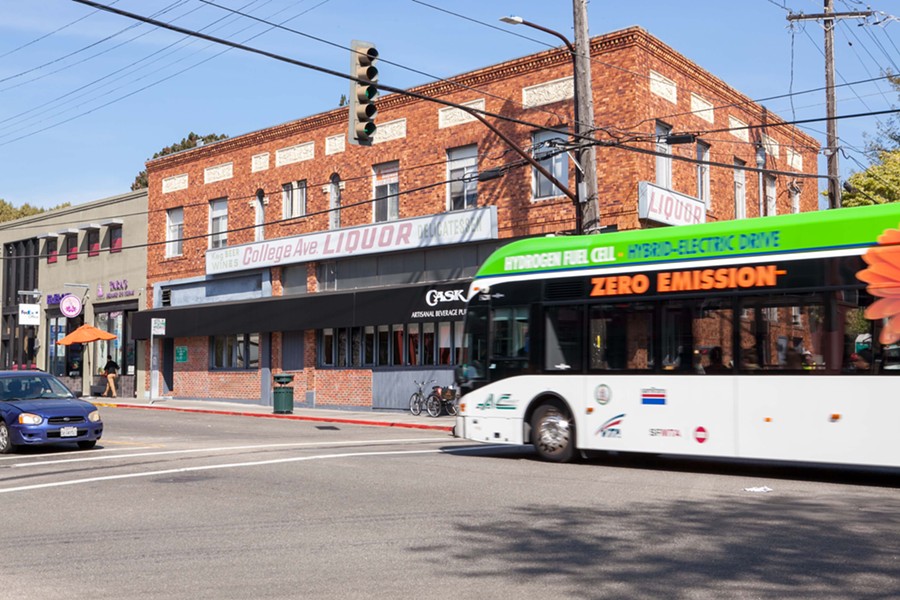 If you really want to hit a business where it hurts, you mess with its parking. Or at least that seems to be the case in a recent controversy on the Berkeley-Oakland border involving an ice cream shop, a liquor store, AC Transit, and a new super-sized Safeway grocery store complex.

Earlier this year, the Line 51 bus stop at the corner of Alcatraz and College Avenues was moved from its previous location, in front of the Mitama Japanese restaurant, to just across the intersection in front of Cask (3185 College Ave.), a high-end liquor store. In a kind of game of dominoes, the loading zone that had previously been located in front of Cask got bumped down the street, in front of a Tara’s Organic Ice Cream. And the five parking spaces in front of Tara’s were eliminated.

The result, the affected local business owners say, is that business has plummeted. And many have been left wondering: Why did the City of Berkeley allow this to happen?

According to James Kim, whose family owns the building that houses Cask, many of the shops at that corner are “quick service” businesses — such as Tara’s or FedEx — in which the typical customer just wants to run in to make a brief transaction. Kim argues that businesses like those are disproportionately impacted by a loss of street parking, and, according to the owners of Cask and Tara’s, that seems to have been the case. In a letter that she wrote to Berkeley’s District Eight Councilmember Lori Droste, Tara’s owner Tara Esperanza said the store’s January sales — after the parking spaces were eliminated — were $1,505.81 lower than they had been the previous January. Cask owner Brian Sheehy said he has also seen business slow down in the weeks following the change.

To make matters worse, Sheehy and Esperanza both say they weren’t notified about the changes until it was too late for them to offer feedback. Normally, AC Transit reaches out to businesses that might be impacted by the relocation of a bus stop, as the agency did for Line 51 projects elsewhere on College Avenue. But in this case, because the project was funded by Safeway as one of the “traffic mitigations” that the company was required to implement in order to ease the impact of the increased traffic flow to the neighborhood created by the new supermarket, AC Transit didn’t send out any notification.

Wendy Gutshall, a spokesperson for Safeway, stated in an email to me that the changes to the bus stop and loading zone placement were “driven by the city and AC Transit.” In an email exchange with Berkeley city officials, a Safeway representative claimed to have gone door to door to inform businesses about the proposed changes, but both Kim and Esperanza said they were never notified. Mark Humbert, the District Eight appointee to Berkeley’s Transportation Commission, said he thinks those businesses just wound up slipping through the cracks. “I think what happened there was really inadequate public notice by Safeway,” he said.

Whoever was ultimately to blame, it’s clear that the process did little to appease the fears of some local merchants who were suspicious of the Safeway project — who saw it as a case of a big corporation stepping all over local mom-and-pop stores. Esperanza, for her part, said she believed that Safeway was the driving force behind all of these changes and that the bus stop move was part of the supermarket chain’s broader agenda, which, in her view, includes leasing the retail space in front of Safeway (which is in Oakland) to direct competitors to existing businesses — namely, a new Philz Coffee (potentially taking away business from Cole Coffee) and a branch of the ice cream sandwich shop C.R.E.A.M.

“They’re just trying to crush small business and make it easier to patronize their store or their businesses,” Esperanza said.

According to AC Transit officials, however, there wasn’t anything nefarious behind the bus stop move. In fact, Chris Peeples, president of the AC Transit board of directors, said that for the past several years the agency has had a policy of moving bus stops from the “near side” of an intersection (before a traffic light) to the “far side” (after the light) whenever possible. Peeples said the reason for this is twofold: to allow buses to pass through the intersection as soon as possible and not be stuck waiting for the light to change after picking up passengers, and to avoid having impatient cars attempt to go around a bus in order to make a right turn.

In this specific case, Peeples said that Safeway, as part of its effort to create “traffic mitigations,” asked AC Transit for suggestions. It was at AC Transit’s request that the bus stop and loading zone move — and the loss of street parking that resulted from that — became part of Safeway’s overall development project, Peeples said.

But Kim argues that in this particular case, moving the bus stop to the far side of the intersection may have made the traffic situation less safe than it had been before. Because customers of stores such as Tara’s and Cask often plan just to make a quick purchase, those who can’t find parking sometimes now park illegally in the loading zone in front of Tara’s, Kim said. That, in turn, results in delivery trucks double-parking alongside the loading zone. In a video that Kim posted online, you can see one such scenario, in which a bus leaving the College/Alcatraz bus stop has to pull into oncoming traffic just to get around the illegally parked cars that had clogged up the entire northbound side of the street.

Here's a clearer view, shot from a different angle:

Moreover, Kim and other critics of the new bus stop say they aren’t even convinced that the stop even helps AC Transit achieve its stated goal of improving the speed and efficiency of Line 51 — not when there is another bus stop, located directly in front of the Safeway complex, less than 600 feet away. According to Kim’s reasoning, wouldn’t the bus route be more efficient if buses didn’t have to start and stop again in such a short span?

The upshot is that Kim, Esperanza, and others have petitioned to have the city reconsider the placement of the bus stop. Possible alternatives that they’ve suggested include moving the bus stop further north, away from the busy commercial corridor, or simply removing it altogether — the rationale being that the stop in front of Safeway is close enough, and centrally located enough, to service that entire stretch of College Avenue.

Farid Javandel, the city’s transportation manager, said the first step toward any possible change would be to initiate a meeting between AC Transit, the City of Berkeley, and, most importantly, the local merchants who oppose the current configuration.

Humbert, the transportation commission member, said that, speaking personally, he’s sympathetic to the businesses that have been negatively impacted by the loss of street parking: “I think they’ve been unfairly burdened. I would like to see some kind of a change and a reallocation of the burden.”

Either way, Javandel said the most important thing would be for the city and AC Transit to do extensive public outreach before any new change is implemented, so as to avoid a repeat of what just happened.

After all, as Humbert noted, “Parking is such a touchy issue in Berkeley.”