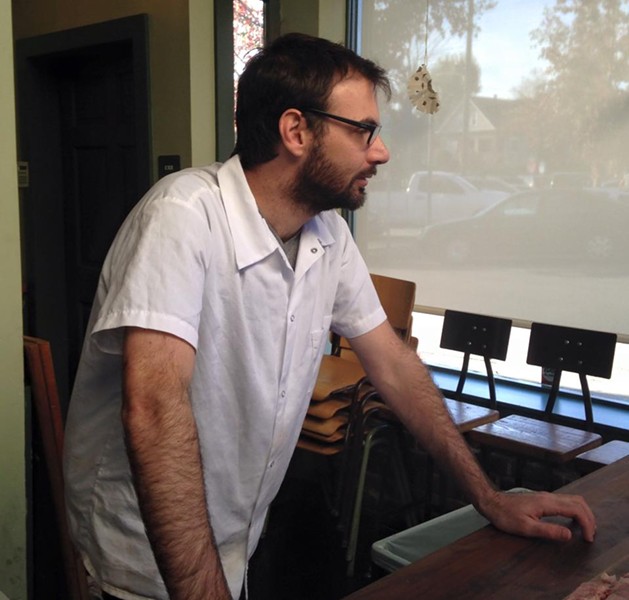 Will Oakland restaurants be ground zero in a new movement to ditch the tip line?

The latest dining establishment to make the leap is Homestead (4029 Piedmont Ave.), a casually upscale neighborhood restaurant where chef-owners Fred and Elizabeth Sassen plan to raise prices and eliminate tips in order to pay for the city-mandated minimum wage hike that’s coming next month — and to repair what they believe is a broken, industry-wide business structure, in which a typical server winds up making three times as much money as a cook.


In recent weeks, Bay Area restaurateurs have announced a variety of plans to address the minimum wage increases that voters in Oakland, Berkeley, and San Francisco approved this past November. These have included price increases, the implementation of mandatory service fees, and hybrid approaches that would retain some element of the current tipping system. By comparison, Homestead’s plan is relatively straightforward: Menu prices will go up by about 20 percent across the board, and tipping will no longer be permitted.

The higher prices will be implemented on March 2, which is the day Measure FF, the bill that raised Oakland’s minimum wage to $12.25, goes into effect.

“Ultimately, what this costs the guests is nothing,” Fred Sassen said, citing the fact that, despite the cultural expectation that many Americans have with respect to rewarding or punishing a waiter based on the quality of service, most customers currently leave around a 20 percent tip.

What the change will allow Homestead to do is to redistribute its pay structure. California law mandates that all of the money that a restaurant receives in gratuities be paid to employees directly involved in providing service, which is how a server at a busy upscale restaurant might wind up taking home $40 or $50 an hour even if his or her official wage is only $9 an hour. Sassen isn’t the first Bay Area restaurateur to point out that back-of-the-house employees — i.e., the cooks — don’t make anywhere close to that much, and that an unintended consequence of the minimum wage increase might be to widen that disparity.

“We are absolutely in favor of the raise of the minimum wage,” Sassen said. But he believes that Homestead's new tip-free model ensures that his lowest-paid workers will be the ones to benefit. According to Sassen, a line cook will be paid $18 to $20 an hour under the new system, which is a fairly substantial raise. Meanwhile, servers will start out at around $20 an hour — a living wage, but potentially only half as much as they made when they received tips.

What remains to be seen, then, is whether servers currently employed at Homestead will leave en masse to take jobs at other restaurants that do allow tipping. Sassen said he hopes that they won’t — and that because managers, who are not legally allowed to receive tips, will also receive a pay increase under the new model, high-performing servers will be be able to make more as they advance in their careers. But Sassen is preparing for the possibility, which is why he announced the changes to his employees this past weekend — giving them a full month to decide if they want to stay, and to look for new jobs if they so choose.

Homestead joins Camino and Duende among high-profile Oakland restaurants that have decided to eliminate tipping — or, at least, to move in that direction. (Duende chef-owner Paul Canales told The Chronicle that he plans to move away from the tipping model more gradually.)