Mid-Week Menu: Nightly Ramen, the Loss of a Mural, and a Juice Bar Inside a Senegalese Restaurant 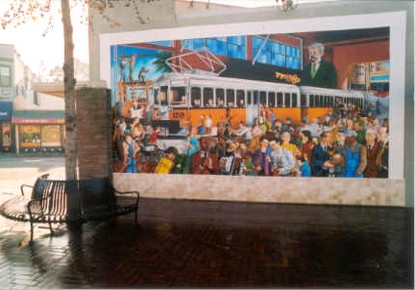 1) The much anticipated permanent brick-and-mortar location of Kronnerburger (4063 Piedmont Ave., Oakland) has come under fire from a local neighborhood association over the removal of a beloved mural, Inside Scoop reports. The Our Oakland blog was the first to notice that a large section of the Key Route Plaza mural — artist Rocky Rische-Baird’s tribute to the historic trolley line that used to pass through the restaurant site — had been removed. Chef-owner Chris Kronner expressed regret for the loss, but said that the inside of that particular section of the wall was covered with black mold. According to Kronner, the Piedmont Avenue Neighborhood Improvement League never offered a realistic plan to save the mural.

In the meantime, when I spoke to Kronner recently, he said the recent rains have set him back several weeks. He’s now aiming to open Kronnerburger around the third week of January.

2) Eater reports that Rockridge’s ever popular Ramen Shop (5812 College Ave., Oakland) is now open on Tuesdays, which means you can get your noodle fix seven nights a week. Originally, the extended hours were meant to coincide with the opening of Ramen Shop’s next-door expansion, but co-owner Sam White told me that the restaurant is still waiting for building permits from the city in order to start construction.

4) CreAsian Himalayas (1269 MacArthur Blvd., San Leandro) has gone through various permutations over the years — first, it was an Asian fusion restaurant; then, it reopened as a strictly Nepalese restaurant. Now under new ownership, CreAsian has relaunched the Asian fusion component of its menu — check it out here.

5) The Freedom Farmers’ Market in Temescal (5316 Telegraph Ave.) has launched a new Harvest Box program — available for pickup at the market each Saturday in $10, $20, and $25 versions. The $25 “Sponsor Box” helps subsidize part of the cost of a $10 box for someone who wouldn’t otherwise be able to afford it.

6) Inside Scoop reports that there are some big names on the Berkeley Food Institute’s roster of
visiting teachers, including Mark Bittman and Noma cofounder Claus Meyer.

8) Here’s a look behind the scenes at the builders who are helping to drive the East Bay’s restaurant boom, courtesy of Bay Area Bites.

9) Finally, ICYMI, the Kwik Way is reopening temporarily as a new outpost of Merritt Bakery, and the long-lost chef of Rico’s Diner reemerges at a new downtown Oakland bar called The Hatch.