1) Cask, a high-end liquor store at 3185 College Avenue in Berkeley, has softly opened and is offering free trike-powered delivery to the Rockridge and Elmwood neighborhoods, Inside Scoop reports. The shop is the latest venture from the ampersand-loving folks behind San Francisco’s Bourbon & Branch and downtown Berkeley’s Tupper & Reed, which is expected to open in six weeks or so.

2) Last week, we broke the news of the LIBA Falafel brick-and-mortar’s soft opening at 380 17th Street in Uptown Oakland. We’ve gotten a few more details since then, including the shop's current hours, which are from 11 a.m. to 2 p.m., Monday through Friday. Weekend and evening hours are forthcoming. Owner Gail Lillian tells us the restaurant is really playing around with its seasonal falafel bar toppings, which currently include things like grilled curried peaches, pickled grapes with star anise, and roasted cauliflower with za’atar and currants. 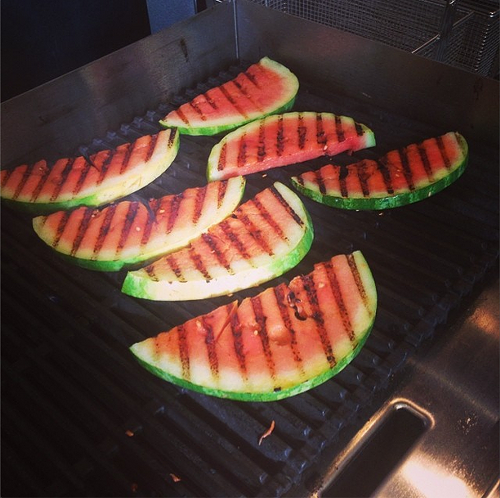 3) Berkeleyside Nosh reports that the newest location of Philz Coffee (1313 9th St.) is now open in West Berkeley, in the new Gilman Street plaza. The plaza will also feature Doughnut Dolly’s new shop (right next door to the Philz) and a Whole Foods, the latter of which is slated to open in November, Berkeleyside reports.

4) Roli Roti has a acquired a new, 10,000-square-foot production facility in Oakland that will allow the popular food truck to greatly increase its free-range chicken and heritage pork offerings, Inside Scoop reports. Also of note: Owner Thomas Odermatt says he has his eyes on building out a small, “hole in the wall” brick-and-mortar restaurant.

5) Over in the Gourmet Ghetto, Berkeley’s La Fable (1508 Walnut St.) has closed, Berkeleyside Nosh reports. Word on the street is that it will be replaced by a vegetarian restaurant.

6) The Filipino takeout spot Lucky Three Seven (2868 Fruitvale Ave., Oakland) continues to make moves: Just a week after expanding the restaurant’s hours to midnight daily, the owners are now planning a big block party for National Night Out on Tuesday, August 5, from 3 to 9 p.m. Festivities will include live music, a boxing match, free hot dogs and ice cream, a lumpia eating contest, and maybe — if they can swing a permit — some fireworks. The block of Brookdale Avenue in front of the restaurant will be closed off for the event.

7) California Magazine looks at how and why so many U.C. Berkeley grads — from Belli Osteria’s Paul Oprescu to Cupkates’ Kate McEachern — wound up going into careers in food. “Ultimately, for them, feeding America seemed infinitely more creative and fulfilling. And in some cases wildly more profitable.”

8) And here’s Eater’s take on what’s on every trendy restaurant menu right now — from newfangled deviled eggs ($9) and moules frites that spent a semester in Thailand ($16) to a pork chop from a wise, soulful farmer (for $31 with no sides, natch).

9) ICYMI, a cocktail competition in Albany made me wonder if artisan oils are the next trendy cocktail ingredient, and a vegan fast food restaurant tries to move forward in the aftermath of a staff implosion.

And one last quick note: I’m out of town on vacation for this next week, so I leave you in @cyntaur’s capable hands. See you in August!