The best pop-up I’ve been to so far this year took place in the back of a wine shop, where a trucker-hat-wearing dude who works there set me up with a glass of righteous Syrah, and where I feasted on lamb cooked two ways — as good as any fine-dining lamb I’ve eaten lately, except it was cooked on a makeshift induction-burner setup and only set me back a modest $18. 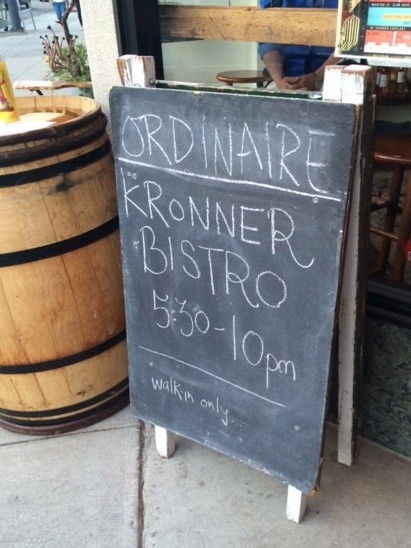 Like all great pop-ups, Bistro Ordinaire has a rollicking, off-the-cuff feel to it — more like you’re hanging out at a particularly festive dinner party than dining at a formal restaurant. (The worst pop-ups, or the most boring ones at least, are stolid sit-down affairs, when a restaurant basically decides that it just wants to change its menu for a night.) The night I swung by, I placed my order at the bar and walked up a flight of steps to the upstairs mezzanine level, where there was a big communal table and handful of two-tops — all cobbled-together pieces of furniture that looked like castoffs from the local elementary school. Old chandeliers and a veritable fire hazard’s worth of votive candles provided a touch of romance.

What I loved was the casual vibe and how mixed the crowd was — tech startup types, middle-aged oenophiles, attractive young couples on a date night. Everyone seemed to be having a good time.

(A quick shout-out to Ordinaire owner Bradford Taylor, who’s doing God’s work in helping dispense with the notion that wine shops are all stuffy, intimidating places frequented only by the rich.)

Anyway, once the food arrives, everything else fades away. These days, Kronner is best known as a burger guy — his forthcoming burger-focused Oakland restaurant, KronnerBurger, is slated to open on Piedmont Avenue, in the old J’s Mexican and American Food spot, sometime this fall. So it’s easy to forget that his previous gig was at Bar Tartine. Kronner told me the food at Bistro Ordinaire is closer to that style: riffs on the kind of simple food you’d find at a little Parisian bistro — terrines, salads, raw fish preparations, and, of course, plenty of meat. All of it is portioned to be shared.

The main entrée the night I visited was a hunk of lamb shoulder, slow-roasted until it was lush and decadent, and pleasantly chewy lamb ribs that had been thinly cross-cut (like Korean kalbi) and quickly seared in a pan. Also on the plate: juicy butter-braised French Breakfast radishes, a layer of roasted eggplant purée, and cured olives that added a nice briny note. The salt and oil on the plate combined to form a kind of slurry similar to what I’ve been served at Korean restaurants — a delicious sauce for the lamb. Dessert was a tender nectarine almond cake any French bistro would be proud to serve.

For the entire year and a half since he first launched KronnerBurger (at the Mission District nightclub Bruno’s to start out), Kronner been in permanent pop-up mode, and he’s pretty much mastered the genre at this point. He’s doing all this on two induction burners and a small tabletop oven, with no one helping him in the kitchen, and just a couple of Ordinaire employees to function as all-purpose runners/bussers/cashiers. It’s easy to get excited thinking about the food he’ll be able to put out once he has a wood hearth and a full kitchen staff.

Pop-ups, by their nature, are ephemeral, but Bistro Ordinaire should continue at least through the end of August if not beyond — right up until Kronner gets too busy with the launch of his restaurant to keep doing it. The good news is that Kronner said he plans to serve many of the dishes that he’s been testing out his restaurant opens. The idea, Kronner said, is that diners who aren’t in the mood for a burger will be able to piece together a meal of shareable, not-so-small plates. And Ordinaire’s Taylor will curate the wine list.

If you haven’t made dinner plans yet, Ordinaire Bistro will pop up from 5:30 to 10 p.m. tonight and tomorrow night, with a seafood-centric menu — crustacean sausage ($18) and seared local albacore ($20), the first of the season. Each week’s menu is posted on Ordinaire’s Facebook and Tumblr pages on Monday or Tuesday. Reservations are accepted for parties of six or more only.