Mid-Week Menu: Barkada Is Closed, Shakewell Is Open, and Little Star’s Owner Gets into the Burger Business

1) Barkada (4316 Telegraph Ave.), Temescal’s cozy bakery-turned-full-service-restaurant, closed suddenly last week, Inside Scoop reports. The restaurant — which, among other charms, served my favorite chocolate croissants in town — shut its doors a little over a year after it opened. When I reached out to Barkada's owners, they told me the decision to close was due to a personal health issue, not anything to do with finances or the success of the restaurant. Here’s to hoping that everyone gets better and that, down the road, the business might rise again.

3) Jon Guhl, owner of the Albany branch of Little Star Pizza and The Star on Grand, is opening a burger joint called Boss Burgers (1187 Solano Ave.) in Albany, Inside Scoop reports. The restaurant will serve smaller, Shake Shack-style burgers made from fresh-ground Prather Ranch beef. Guhl and his chef and partner in the venture, former Cafe Rouge bar manager Ryan Murff, are aiming for a September opening.

4) Also in Albany, the proprietors of Sam’s Log Cabin (945 San Pablo Ave.), a diner located inside an honest-to-goodness log cabin, has launched a $40,000 Kickstarter campaign to help pay for a kitchen expansion and a new backyard patio and stage. As of this posting, they’re nearly halfway there.

5) Tablehopper reports that Downtown Oakland’s Modern Coffee (411 13th St.) is opening a second location in Oakland, this time Uptown — in the Leamington Building, at the intersection of 19th and Franklin streets. The new cafe should open by the end of July or in early August.

6) Shakewell (3407 Lakeshore Ave.) — the Spanish-Mediterranean-inspired restaurant project from two high-profile Top Chef alums — had its official opening night in Oakland last week. Check out some pretty pictures of the restaurant’s wood-burning oven and the rest of the space, courtesy of Eater. 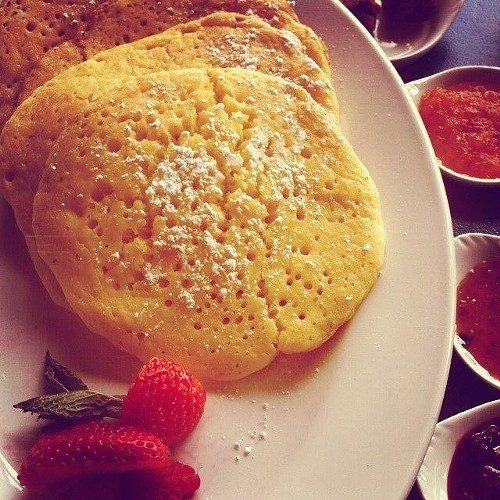 7) Over in Temescal, recently-reviewed Cal-Moroccan spot Doukkala (4905 Telegraph Ave.) has launched brunch service on Saturdays and Sundays, from 11 a.m. to 3 p.m. The menu includes things like Moroccan-style baghrir pancakes, a Moroccan Benedict that features house-made Merguez sausage and harissa hollandaise, and a grass-fed burger.

8) Kensington’s Benchmark Pizzeria (1568 Oak View Ave.) is celebrating its two-year anniversary with a $40 prix-fixe menu (three courses, plus two drinks) from 5 to 9 p.m. this Sunday, July 20. Fifteen percent of the night’s proceeds will go to the Alameda County Community Food Bank. The event kicks off a new feature wherein a different charity or nonprofit will benefit from a monthly Tuesday night dinner.

10) Finally, ICYMI, Uptown Oakland’s Marrow has closed, and a new gluten-free bakery is coming to Emeryville.