1) Chris Pastena’s forthcoming upscale Mexican restaurant in The Hive complex in Uptown Oakland now has a name: Calavera. Eater reports that Pastena plans to offer the largest selection of tequila and mezcal in the East Bay, and both corn and flour tortillas made fresh in-house. He has also named a new general manager, Michael Iglesias, and an assistant GM, Jessica Sackler, both of whom are also partners in the venture. Iglesias and Sackler are currently helping out at Lungomare, Pastena’s waterfront Italian restaurant in Jack London Square, while they wait for Calavera to open.

2) The vacated Cafe Aquarius space at 1298 65th Street in Emeryville has a new tenant: The E’ville Eye reports that Bacano Bakery, maker of gluten-free baked goods and breads, will turn the space into a brick-and-mortar retail bakery and cafe. Bacano currently sells its products mostly at farmers’ markets and cafes. The new bakery is expected to open sometime this summer — stay tuned for additional details. 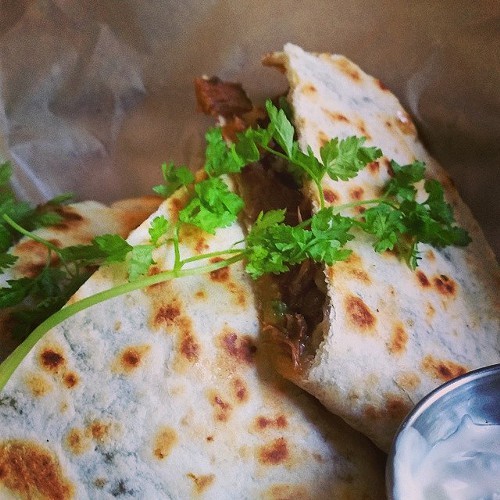 4) Berkeley just wouldn’t be Berkeley if it weren’t the kind of place that attracts raw-foods cafes, paleo-friendly practitioners of molecular gastronomy, and, soon, a “vegan fine dining” restaurant. Sanctuary Bistro (1019 Camelia St.) — previewed earlier by What the Fork — has announced its grand opening dates: On August 1 and 2, the restaurant will serve a $45 prix-fixe menu.

5) The dogs might have a dedicated food truck, but the cats of Oakland are getting their own cafe — and soon, too. Having completed a successful Indiegogo campaign, Cat Town Cafe — a place where animal lovers can sip on lattes and play with cats (with a possible eye toward adoption) — just signed a lease for a space at 2869 Broadway, a former office supply store near Auto Row. Look for a September opening.

6) The La Farine bakery at 1820 Solano Avenue in Berkeley closed suddenly yesterday, Berkeleyside Nosh reports. Evidently, the owner and landlord were unable to come to terms on a lease renewal, and there’s some speculation that the dispute centered on a disagreement over who ought to pay to fix a problem with mold. The bakery is now looking to move to another location in the neighborhood. La Farine's three Oakland locations remain open.

7) The eagle-eyed scouts over on Chowhound report that West Berkeley’s TC Fried Chicken & Fish (2025 San Pablo Ave.) — which slung some damn good fried chicken inside a donut shop — is no more. Instead, it sounds like Rainbow Donuts will expand its bakery offerings.

8) Enoteca Molinari (5474 College Ave., Oakland), the Rockridge Italian wine bar, is planning to expand into the hair salon next door, Inside Scoop reports. If all goes according to plan, the expansion will double the restaurant’s seating capacity and allow it to add a cocktail program.

9) Opponents of California’s much-hated “glove law” can rest easy: The law — which would have required bartenders, sushi chefs, and other food-service workers to wear plastic gloves every time they handled food — has finally been repealed, The Chronicle reports.