1) Uptown Oakland’s kind-of-new kid on the block is Daniel Patterson’s Ume (2214 Broadway), which opened last night in place of Plum, which completed its last weekend of service after three-and-a-half tumultuous, occasionally brilliant years. Check out Ume’s Japanese-inspired menu that Patterson and chef Brett Cooper have put together here. The menu skews, izakaya-like, toward small plates, mostly in the $6 to $10 range, with just a handful of larger “bowls” such as a fried-chicken-and-egg ramen ($17). 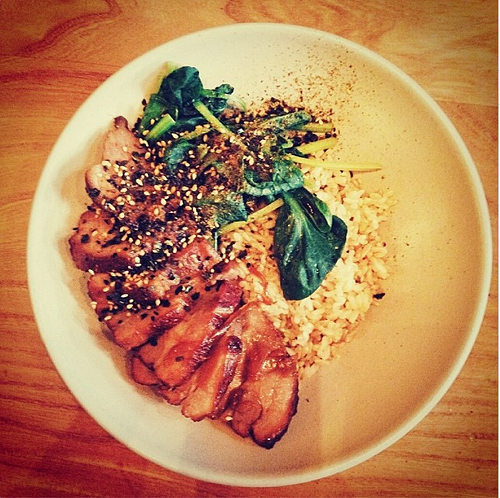 2) Encuentro’s new, larger location at 550 Second Street in Oakland’s Jack London Square neighborhood will softly open this weekend, Inside Scoop reports. The vegetarian restaurant has dropped its former “wine bar” designation and will now offer a number of larger entrées — creamy polenta with Italian grilled vegetables, an empanada stuffed with pumpkin seed piccadillo, and so forth. Inside Scoop has a sneak peek at the menu.

4) Berkeley’s vegan cinnamon bun purveyor Cinnaholic (2132 Oxford St.) is planning to expand to a 100-franchise chain within the next five years, the San Francisco Business Times reports. The news comes after the bakery’s owners had a successful appearance on ABC’s business-themed reality show “Shark Tank.” Even though owners Florian and Shannon Radke rejected the $200,000 investment offer they received on the show, apparently franchise inquiries came pouring in after the episode aired.

5) Last week, Berkeley-based SpoonRocket announced that it has raised $11 million in Series A funding. But perhaps the bigger news, for those mainly interested in whether the food delivery service’s offerings are worth their $8 price tage, is that the company has hired a new senior executive chef: Barney Brown, formerly of the Rotunda Nieman Marcus. (Check out my earlier story about SpoonRocket here.)

7) Earlier this month, a new halal restaurant called Khyber Curry Kabob Falafel House (300 13th St.) took over the tiny downtown Oakland spot previously occupied by Q’s Falafel House. I’d been planning a two-for-one review of Q’s and Aria Grill & Cuisine (the subject of this week’s review), but when I stopped in at Q’s, I was told that new owners and a new chef had just taken over. The falafels I tried were pretty good (and very garlicky), but the place only had a limited, possibly transitional menu in place — not ready for a review, but worth a brief mention here. There were gyros and mantu on the menu too, and there was a sign up indicating that all the meat was halal.

8) SFoodie interviewed former Gourmet chief Ruth Reichl about her new novel, Delicious!. Reichl, who lived in Berkeley during the early part of her writing career, spoke glowingly about the Bay Area’s food scene — Berkeley Bowl is “like Disneyland” to her, she said.

9) Chow put together a nice top-ten list of reasons to love Oakland food. “Cut the ‘gritty’ crap,” the author writes. “These days the food scene in Oakland, California, is glittery.”