The popular San Francisco-based Senegalese restaurant Bissap Baobab is opening a new location in downtown Oakland, at 381 15th Street, giving the East Bay a much-needed new option for West African cuisine. During its soft opening period, which will kick off this Sunday, the restaurant will only be open for lunch, from 11 a.m. to 3 p.m., Tuesday through Sunday.

Proprietor Marco Senghor told What the Fork that to start out, he’s focused on creating a number of “express” options — African wraps and savory crepes available as quick takeout options — to cater to the downtown lunch crowd. It’s a notable approach, as African restaurants tend to be associated with long leisurely meals — which diners can still experience at Bissap Baobab if they order traditional Senegalese entrées like mafe (a peanut curry stew) and yassa (grilled chicken with mustard sauce). 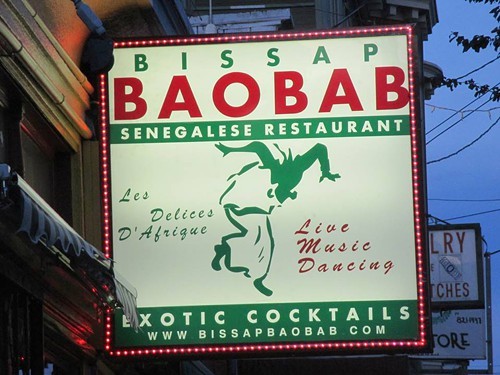 Once the Oakland location’s liquor license is approved, the restaurant will add its line of signature ginger, tamarind, and hibiscus juice-based cocktails, and expand its hours to include dinner.

A soft opening celebration will take place on Sunday, May 4, from 11 a.m. to 5 p.m., featuring a free buffet spread, house-made juice samples, and live music courtesy of guitarist (and Oakland native) Kenya Baker and a group of African drummers.