Since it opened in late 2011, Haven has been known, at least in part, for its relatively high prices and high-concept cuisine — a reputation that, according to chef Chris Johnson, might have been intimidating to the casual after-work crowd. But over the course of the past year, the restaurant has initiated a series of small-scale reinventions, including the addition of family-style dining options for both dinner and weekend brunch.

Johnson took over the kitchen at Haven in the fall after opening chef Kim Alter moved across town to take over Plum (Patterson’s other Oakland restaurant). His new happy hour menu might not be a step in an entirely new direction, but it does appear to be an effort to make the restaurant a little bit more inclusive and accessible.

Haven’s previous happy hour program was very short and very early (from 4 to 5 p.m. each afternoon), and was limited, food-wise, to a small selection of appetizers off the regular menu. Now, happy hour specials will be available for customers seated at the bar or in the lounge area from 5 to 8 p.m. Sunday through Thursday, and from 5 to 7 p.m. on Fridays and Saturdays. There will be $9 cocktails (marked down from $11), $6 wines by the glass, and Linden Street draft beer on tap for $5. 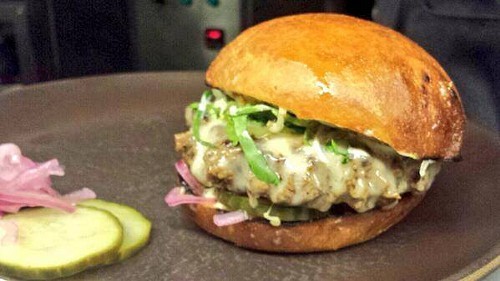 Meanwhile, in addition to a selection of appetizers, Johnson has added several bar-snacky items to the menu, mostly in the $4-$6 range — things like kale chips with smoked paprika ($4) and crispy potatoes with fried garlic and rosemary ($5). Diners seated at the bar can also order Haven’s new burger ($15), just unveiled last week, which features Schmitz Ranch beef, sharp cheddar, horseradish aioli, a house-made onion-focaccia bun, and a side of fingerling potatoes.

The idea, Johnson said, is that customers could piece together a full meal just ordering off the happy-hour specials list — though his hope, of course, would be that something on the regular menu might also catch their eye.

Here’s an exclusive peek at tonight’s happy-hour food menu in its entirety: