Farm-Fresh Produce for the Campus Set

Once upon a time, when I was a wide-eyed college freshman, I thought going a day without French fries was the pinnacle of healthy eating, and my most ambitious cooking projects revolved around creative applications of instant ramen. I certainly never shopped at farmers’ markets.

But times they are a-changin’ — or at least they are if you attend UC Berkeley, where undergrads rub shoulders with Michael Pollan and make unlimited trips to the dining hall’s organic salad bar. What’s more, for the past few years, Cal students have also been able to buy budget-priced, farmers’-market-quality fruits and vegetables at a student-run grocery store, at a weekly outdoor produce stand, and, most recently, by way of a campus version of a CSA box. 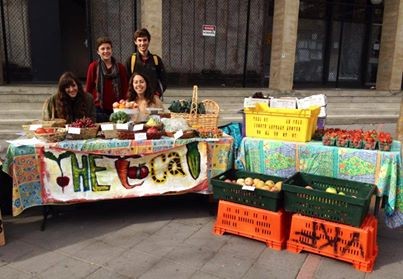 The latter two are the latest initiatives of the Berkeley Student Food Collective (2440 Bancroft Way, #102, Berkeley), a nonprofit, student-run grocery store that has been selling locally-sourced produce and healthy prepared foods since it opened in 2010. This past year, the collective has made moves to extend its reach in terms of providing Cal students with access to high-quality, inexpensive produce. For starters, the collective merged with another campus food group, The Local, which had, for many years, purchased fruits and vegetables in bulk for a discounted rate at the Temescal Sunday farmers’ market, and then sold it — with no markup — on Sproul Plaza (at the intersection of Telegraph Ave. and Bancroft Way) the next day.

Since taking over The Local, BSFC has continued to run the weekly produce stand, which is open on Mondays from 10 a.m. to 2 p.m., while adding items that are sourced directly from farms as well. Gwen von Klan, the BSFC operations manager, said the collective’s 169 student volunteers are also considering adding other locations — perhaps one on Piedmont Avenue, where most of the university’s fraternities and sororities are located, and another in the Northside residential neighborhood.

Although The Local is little known outside of campus, the produce stand is worth seeking out— in part because it’s such an economical option, with prices that are 10 to 20 percent lower than what you’d pay at the farmers’ market, according to von Klan. On a recent Monday, for instance, big bunches of kale, chard, and carrots from Capay Organic were priced at $1.25 each, and apples are routinely sold for as little as $1 a pound. And, with the exception of avocados (because, really, what utopian vision of veggie-centric Californian life doesn’t include avocados?), every item is sourced from within 250 miles of the BSFC store, and all of it is either certified organic or, at the very least, grown using sustainable agricultural practices.

“We attract the kind of customer that already knows — who can tell that our produce is a good deal,” von Klan said. 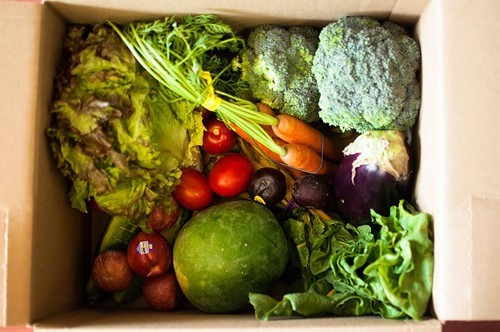 Meanwhile, for the second year now, the collective is also offering its own version of a weekly CSA produce box. Dubbed simply “The Box,” it features a variety of seasonal fruits and vegetables, can be purchased on a week-to-week basis, and is available for pickup at the grocery store each Friday. Also included is a newsletter that usually has a recipe and a profile of one of the featured farms. Priced at $15 each, The Box also offers customers a slightly discounted rate, and it’s less expensive than most local CSA boxes, which tend to start at around $25 a box — a daunting investment for someone on a student budget.

Still, von Klan said UC Berkeley still has quite a ways to go in terms of encouraging its students to eat healthily and sustainably. Although von Klan acknowledged that the campus dining halls have done a lot to improve the healthiness of their food options, she said the collective hopes to work with the university to create resources designed to help undergrads learn how to cook. Von Klan noted that, like at many university campuses, most of the dormitories at UC Berkeley have limited kitchen facilities, and students who live there are required to buy a meal plan. As such, it’s not surprising that almost all of the students who purchase The Box live off-campus.