1) Fans of B-Side BBQ (3303 San Pablo Ave.) take note: The San Francisco Business Times reports that celeb chef Tanya Holland is planning to move her West Oakland barbecue restaurant to a larger space at the corner of 18th St. and San Pablo Ave. — a burgeoning stretch of Uptown that’s already home to such restaurants as Hopscotch and Mockingbird. Citing the safety and visibility issues associated with B-Side’s current digs, Holland told SFBT it has been “exhausting being a pioneer” in West Oakland. That said, the move is contingent on Holland raising about another $1 million in funds, and apparently, despite her fame and success, Holland has yet to receive what she considers to be a fair partnership offer.

SFBT reports that the menu at B-Side 2.0 will continue to feature, but won’t be limited to, barbecue. Whatever you think of the cross-town move, B-Side probably serves the best brisket in the East Bay, so the situation is worth monitoring. (Hat tip to Eater.)

2) Monkey Forest Road, the combination coffee shop/high-end Balinese furniture store/art gallery, has closed its Grand Avenue shop. The art and furniture portion of the business has been moved to a new Uptown showroom at 489 25th St. 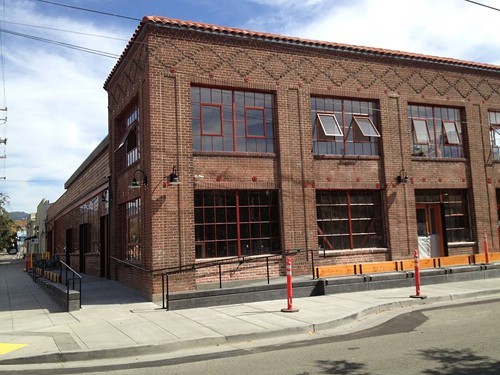 3) Inside Scoop reports that Kelsie Kerr, who previously cooked at Chez Panisse and Cafe Rouge, is opening a new takeout spot based in a commercial kitchen space at The Berkeley Kitchens (2701 8th St.) in West Berkeley. Given its location and lack of seating, Kerr’s new venture, which she’s dubbed Standard Fare, won’t be a restaurant per se, but the concept is more ambitious than your typical food delivery service: Dishes will be packed into beautiful handcrafted (and presumably stovetop-/oven-/microwave-safe) ceramic cazuelas — made by Jered Nelson of Jered’s Pottery — rather than your typical cardboard or plastic takeout containers. The ready-to-reheat meals will available for pickup or via bike-powered delivery courtesy of Pedal Express, and customers will simply return the ceramic pots when they’re done. Kerr told Inside Scoop that a complete meal might consist of an entrée (say, braised duck) and a couple side dishes (roasted turnips, mashed potatoes, etc.), which would come in smaller pots. ETA, according to the Standard Fare website, is early 2014.

4) We previously reported that vegan fast-food joint Nature’s Express (1823 Solano Ave., Berkeley) had closed for good. Well, scratch that. It seems like the owner has had a change of heart, due in large part to the “heartfelt support and overwhelming response” from customers after the initial announcement. The restaurant will remain open after all.

5) 54 Mint, the popular Italian restaurant with locations in San Francisco and Concord, is opening an Italian bakery called 54 Mint Forno in downtown Walnut Creek, at 1686 Locust St., according to Diablo Dish. The focus of the new bakery will be on “breads, pizza, focaccia, and simple Italian pastries.”

7) Oakland Restaurant Week is coming up next week, from January 17-26. More details on the week’s festivities will be forthcoming on What the Fork, but in the meantime, you can check out the “Knife Point” chef interview series that Visit California, the parent organization for all of the various local restaurant weeks, is hosting on the Dine in CA Facebook page each Wednesday morning. First up: Preeti Mistry of Oakland’s Juhu Beach Club. Have something you’d like to ask Chef Mistry? You can submit questions here, then visit the Facebook page to follow the live chat, which will start at 11 a.m. today, Wednesday, January 8.

8) Bay Area Bites and Berkeleyside Nosh both filed nice reports on British chef and television personality Jamie Oliver’s visit to the Edible Schoolyard program at Berkeley’s Martin Luther King, Jr. Middle School earlier this week. Apparently, he declared the Ghanian black-eyed peas dish that the middle schoolers cooked during his visit “delicious” (scroll down for the recipe). Edible Schoolyard founder Alice Waters and Oliver, whose efforts to make school lunches healthier have been well documented (most notably, here in the US, in the reality series Food Revolution), have long shared a mutual interest in food reform and kitchen education, but apparently this was Oliver’s first visit to the Berkeley site. (I wrote a long feature about the middle-school cooking and gardening program a few years ago.)

9) Berkeleyside Nosh also has a nice recap of all of the East Bay restaurant openings and closings from this past year.

10) Finally, ICYMI, while I was away vacationing in the bitter New Jersey cold for the past week and a half, Cynthia Salaysay filled in admirably, filing stories on a new seafood-focused version of a CSA and a proposed bill that would protect the right of Californian urbanites to grow their own food.