Almost every morning, Pizzaiolo (5008 Telegraph Ave., Oakland) opens its doors early, not to sell pizzas or gin-and-tonics or frilly frisée salads, but instead to sling doughnuts, espresso drinks, and — most precious of all — the sweet, sweet nectar of a free wi-fi connection. The Temescal institution is one of a growing number of restaurants that are taking advantage of the morning hours, when their dining rooms would normally sit empty, to dabble in the coffee-shop business.

For the restaurants, it’s a win-win: The cooks are in the kitchen all morning anyway, prepping vegetables or tending to big pots of stock. Why not whip up some pastries, add an extra revenue stream, and generate a bit of goodwill in the community while you’re at it?

The granddaddy of the trend, or at least the most well known exemplar here in the East Bay, is the aforementioned Pizzaiolo, which has been hosting its coffee-and-doughnut mornings since 2007. It has been called the best-kept secret in Oakland, but if my experiences are any indication, it might as well be the worst kept — the place is always packed, with writers and work-from-home types, and even snagging a seat at the bar can be a challenging task.

In an effort to expand my wi-fi-leeching horizons, I checked out two new, equally worthy morning coffee-and-pastry programs — plus another that will launch in the coming month. Here’s the lowdown: 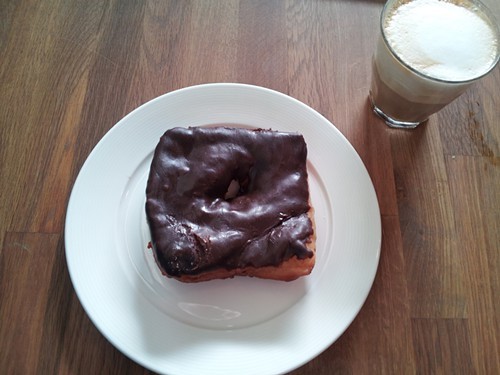 Hard as it is to believe, this quaint Piedmont Avenue newcomer is even cozier during the daytime than it is at night — something about the late-morning sunlight and the little bunches of chili peppers strung up around the dining room in lieu of mistletoe. The food offerings, if an old-fashioned chocolate-glazed doughnut with the airy texture of a French cruller was representative, is notably great, and served with the kind of meticulousness you won’t find at Starbucks. Thick slices of eggy, savory strata (a bacon version and another featuring beet greens) were warmed in a small skillet. I even saw one of the cooks assembling an elaborate yogurt parfait to order. But the best part about mornings at Homestead is that the place isn’t MacBook Central as of yet — during my visit, the crowd was mostly bookworms and friends enjoying relaxed conversation. (Hopefully I won’t have jinxed it by mentioning it here.)

For “Mornings at Nick’s,” there’s no wi-fi and only a handful of tables, so the main attraction is the extensive pastry program that Nick’s Pizza chef-owner Nick Yapor-Cox and head baker Aron Ford have developed. The highlight is a wide selection of seasonally specific applications of flaky croissant dough — chocolatines, croissants topped with fruit, croissants stuffed with mushrooms, and more. I loved how dark and crunchy the bottom of each Nick’s croissant was, yielding a deeply caramelized, buttery flavor that was an especially nice counterpoint for a woodsy roasted chanterelle, thyme, and ricotta filling. Unlike the other morning coffee programs I visited, “Mornings at Nick’s” doesn’t actually end in the mornings — pastries are usually sold through the start of dinner service; the house-baked sourdough breads are available until the pizzeria closes each night.

According to Adesso owner Jon Smulewitz, in Italy, the bar where you downed your last drink at night is often the same place you get your coffee in the morning. So, since the restaurant’s primary identity is as a salumi and cocktail bar, it makes sense that Smulewitz plans to start doing coffee service in the mornings. Food-wise, the focus will be on traditional Italian treats: Sicilian-style cornetti (Italy’s version of a croissant), fresh house-made ricotta, and, of course, a selection of salumi. Smulewitz said he expects to kick things off at the end of January or the beginning of February. The setup should offer something for everyone: morning commuters looking to pick up a grab-and-go pastry, laptop users, or people who want to catch the big soccer match on TV.