A Salsa Maker Opens a Taco Stand at Olde Depot

Mark Sorensen said he started his Oakland-based salsa company, Santipapas, as just a hobby. He’d been a registered nurse for eighteen years and was having something of a mid-life crisis — a desire to do something with his life where he could be his own boss for once.

Now, one year later, Sorensen said what started as a small side gig has expanded “like gangbusters.” Only recently, though, has the project gotten big enough to compel him to quit his day job. On Sunday, in a sudden turn of events, Sorensen launched the newest incarnation of Santipapas: a permanent pop-up taco stand inside the Jack London Square neighborhood’s Olde Depot Public House (468 3rd St.).

Sorensen explained that he makes his salsas in the kitchen at Authentic Bagel Company, right around the corner from Olde Depot, so he’d gotten to know the bar’s owner, Rebecca Boyles. The two had casually discussed an idea Sorensen had been toying with — to set up a gourmet “taco truck” inside Olde Depot — but another chef was running the bar’s kitchen at the time. Last week, Boyles asked Sorensen if he was still serious about the idea: “I said, ‘Sure, how about January 1?’ She said, ‘How about this Saturday?’” It turned out the other chef resigned suddenly. 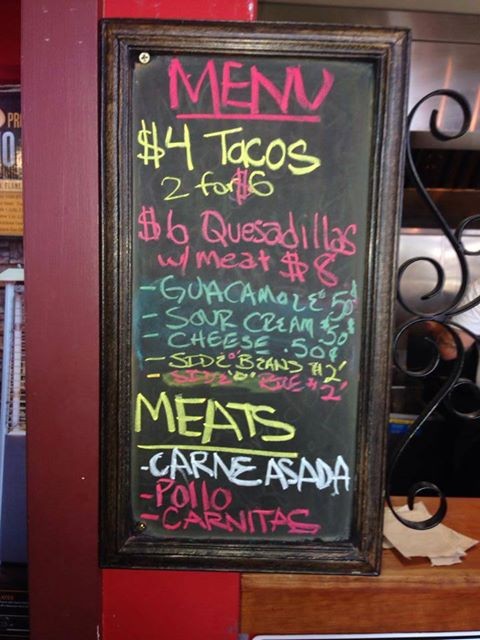 It’s your usual path from nurse to part-time salsa hobbyist to full-time chef within the span of a year. Sorensen told What the Fork that although he’s barely slept this past week, he is certain he’s made the right decision.

Sorensen said his food is inspired by his mother, who hails from a town called Santiago de Papasquiaro (nicknamed “Santipapas”) in the Mexican state of Durango. The basic philosophy is good ingredients; simple, straightforward cooking; and nothing too unwieldy to eat at a bar (no burritos, for instance) — and, of course, a central role for Sorensen's line of salsas.

The brief menu consists of tacos ($4, or $6 for two), quesadillas (stuffed with meat or unstuffed), and a few appetizers and sides. Meat options will include carnitas, carne asada, and chicken.

Starting a new restaurant venture is always a challenge, but the Olde Depot project has an additional wrinkle: Boyles originally opened the bar as a vegan business, and, in August, when she brought in a new chef who added meat options to the menu (but kept the soy-protein sliders and such), some of the bar’s vegan patrons felt betrayed — enough to stage a protest and post a slew of angry one-star Yelp reviews. According to Sorensen, when he introduced the new taco menu (which has even less of a vegan focus) this past Sunday, about half of the customers were flabbergasted by the change.

Sorensen said he had an inkling that Olde Depot used to be a vegan spot; he “just didn’t know how vegan it was.” Still, he said he hopes the bar’s long-time vegan customers will recognize that “there's life beyond a seitan slider” and give his meatless options a try. For now, that’s mostly limited to rice and beans and corn tortillas (neither of which are made with lard), roasted seasonal vegetables, and guacamole. Santipapas also sells a rice/beans/vegetable bowl topped with guacamole for $8.

Olde Depot Public House and the Santipapas taco counter are open from noon to midnight every day except Sundays, when they close at 10 p.m.