A year ago, Jonah Hendrickson first told What the Fork about his ambitious plans for The Berkeley Kitchens, a commercial kitchen facility that the real estate developer claimed would be the first of its kind: a 26,000-square-foot historic West Berkeley building filled with stand-alone kitchen units, each of them leased to some up-and-coming food entrepreneur. Participating food artisans would be able to avoid the hourly rental fees and inconvenient time slots offered by many conventional commercial kitchens. Even more importantly, they’d finally have a space they could truly call their own.

Now, Hendrickson’s plans are finally coming to fruition: Starting last week, when Hendrickson’s first batch of tenants passed their health inspections, The Berkeley Kitchens (2701 8th St.) is officially up and running. Initially slated to open in January of this year, the build-out of the facility, which included a city-mandated seismic renovation, hit its share of roadblocks: As Hendrickson put it, “It was a big project — the first project of its kind — and we were all finding our way through.” 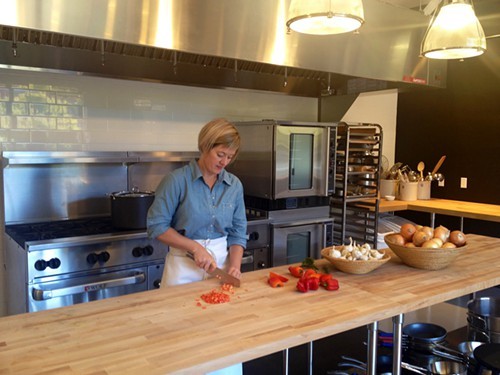 There have been small tweaks along the way. The number of kitchen units has grown from twelve to fifteen. (As of this printing, all but four are under contract, and potential tenants are already negotiating lease terms for the remaining four, Hendrickson said.) A proposed certified dairy facility was scrapped. And, though Hendrickson had anticipated that a couple of mobile food vendors would sign up, the lack of dedicated parking big enough to fit a food truck proved to be a deal breaker.

That said, The Berkeley Kitchens now counts a number of well known local food artisans among its tenants: the eleven businesses who have already signed leases include Baron Baking (the acclaimed bagelry), Morell’s Bread, Nature’s Express (a vegan fast-food restaurant in North Berkeley), and the Tasha DeSerio catering company (run by a former Chez Panisse cook).

The facility seems particularly well-suited for food entrepreneurs who are somewhat established — businesses that are ready to take on a one- or two-year lease, but aren’t big enough to make buying an entire building tenable. It’s a niche Hendrickson believes has long been largely underserved.

Henrickson expects his remaining tenants to pass their final inspections and open for business within the next few weeks. Eventually, he plans to host a grand opening pop-up event to formally introduce his vendors to the public.