The Best International Breakfasts in the East Bay

As much as I enjoy going out for breakfast or brunch, it’s easy to fall into an American-breakfast rut. After so many days of sausage links and pancakes and Lord-knows-how-many permutations of bacon, it can get to be a little much.

Last week, as I polished off an order of beef torta and fried egg over rice at Lucky Three Seven, the new Filipino restaurant I reviewed this week, I thought about how lucky we are in the East Bay to have a wealth of breakfast options that draw on culinary traditions from all over the globe. Here are a few of my favorites:

This unassuming spot in North Oakland is better known for its better-than-average Ethiopian dinner items and bargain-priced (and surprisingly good) scratch-made pizzas. But mostly I go for the Eritrean breakfast — for kitcha fit-fit (crispy toothsome balls of dough mixed with clarified butter and a traditional spice blend, like an East African spin on spaetzle) and Eritrean-style “frittata,” which are juicy, onion-and-tomato flecked scrambled eggs that you scoop up with hunks of French bread.

Traditionally, Koreans don’t really have foods that are specifically designated for breakfast, so — as odd as it might seem to Westerners — it’s typical for the morning meal to feature rice, meat, and vegetable side dishes. That said, Spoon is one of the few East Bay Korean restaurants that are open at 9 a.m. A bowl of juk (rice porridge), served with a few banchans (little side dishes), makes for a satisfying breakfast that won’t weigh you down, and I can go for one of Spoon’s bacon rolls (bacon wrapped around seasoned rice) at any time of day.

Open for nearly a year now at the old Cafe Fanny site, Bartavelle serves California cuisine straight out of the Chez Panisse mold, but every time I have breakfast here, I feel like I’m in Europe. It’s all just so … civilized. Get one of the gorgeous savory boards (say, the one with French breakfast radishes, smoked trout, and a perfect soft-boiled egg) or a bowl of savory quinoa-and-rice porridge topped with ghee and sea salt — a wholesome, yet decadent, start to the day. 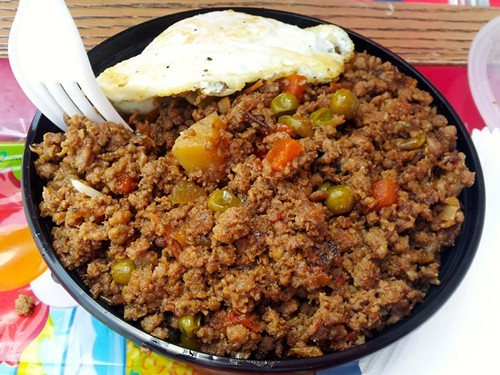 Breakfast at Lucky Three Seven looks a lot like lunch or dinner — some kind of meat served on top of a big bowl of rice, except with a fried egg or two added on top. The selection varies from day to day, but typical options include longganisa (sweet, garlicky sausages), bangus (milkfish that’s marinated in vinegar, then fried), and tocino (sweet cured pork). For a $5 breakfast, this little corner takeout joint is hard to top.

I’ve yet to try it, but for a traditional Indonesian breakfast, check out the new San Leandro location of Padi (16695 E. 14th St.). On Sundays only, the restaurant opens early at 9 a.m., dishing out such breakfast specialties as nasi uduk (steamed coconut rice), bubur ayam (an Indonesian take on rice porridge), and lontong sayur (vegetables cooked in coconut milk).

Finally, as much as I love the ackee and saltfish — one of my all-time favorite breakfast foods — at Miss Ollie’s, the restaurant isn’t open until lunchtime. So I’m looking forward to trying the version at Kingston 11 (2270 Telegraph Ave.), Uptown Oakland’s soon-to-open Jamaican spot, which will eventually offer all-day brunch service on Sundays. The restaurant’s opening has been delayed for several months, but when I checked in with chef Nigel Jones earlier this week, he told me his team is now aiming for a soft opening during the first week of September.

Now someone just needs to tell me where I can find a decent Taiwanese breakfast — shaobing, fried crullers, egg-and-scallion crepes, and savory soy-milk soup — and I’ll be set.

What am I missing? Leave your favorites in the comments!