To the abundance of feathers in Oakland’s culinary cap, let’s add one more: our very own Top Chef alum, Preeti Mistry, who, as previously reported, has found a brick-and-mortar home for her popular Indian street food pop-up, Juhu Beach Club, in Temescal, at 5179 Telegraph Avenue (the former SR24 location).

Mistry said she’d been full-speed-ahead on plans to open in San Francisco’s Mission district when she and her then-business partner parted ways. At that point, she’d been living in Oakland for about a year and had watched amazing restaurant after amazing restaurant sprout up on this side of the bay. 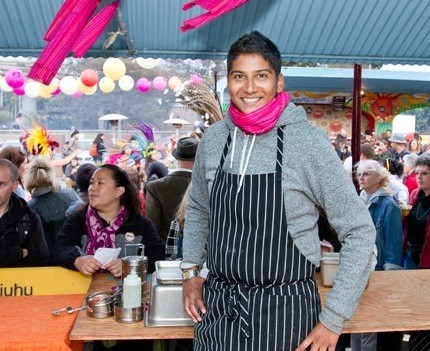 “It seemed like the obvious choice was to open here,” she said.


Mistry looked at other places in Oakland — in Uptown and on Grand Ave. — but even though the SR24 space was bigger (and more expensive) than what she'd originally wanted, it had the huge advantage of already being up to code, with a kitchen that was more or less ready to go.

The fifty-seat restaurant features a six-stool bar counter, a handful of big booths that can accommodate six or more diners, and — best of all — a kitchen that’s completely open. There will be full sit-down table service.

Since Mistry has been ready to open Juhu Beach Club since last fall, when her previous plans fell through, much of the restaurant’s menu is already set. Slider-size variations on a pav bhaji sandwich with different fillings will feature prominently — Brian Wood of Starter Bakery will be custom-baking the bread (the “pav”) for those.

Other snacky items will include a take on spicy chicken wings and a vegetarian mung bean soup that Mistry dubbed Mom’s Guju Chili because, in spite of it being based on her mother’s traditional recipe, diners kept telling her how much the dish reminded them of chili.

Mistry will also serve entrée-size curries at the restaurant — at least three or four different kinds, including a vegetarian chickpea-and-winter-green curry, a lamb or goat curry, and whole chicken leg curry. The idea is for the dishes to feel abundant: “A lot of times you order curries at Indian restaurants, and they're great, but they're just this bowl of sauce with four or five chunks of meat.”

Overall, Mistry said she draws a lot of her inspiration from Indian street food, but she isn’t trying to put out some kind of fusion-y, Americanized version of that cuisine. “Some of [the dishes] are actually more traditional than how they're done in conventional Indian restaurants, where they might cut corners.”

That said, Mistry acknowledged that her food is certainly influenced by her background in Californian, Italian, and modern-European cooking.

Juhu Beach Club is tentatively slated to open March 1 — the palindromic 3/1/13. The restaurant will probably start by opening for lunch Tuesday to Saturday, Mistry said. Dinner service will launch once her beer-and-wine permit comes through.