Dr. DeWitt Augustus Buckingham was among the first to defy racial housing covenants.

DeWitt Augustus Buckingham was an Army captain in the Medical Corps during World War II, a physician in Oakland after the war — and prohibited from buying a home in 1946.

The reason? He was Black.

The fact that Buckingham had found a professional home as one of the first African Americans on staff at one of Oakland few integrated facilities wasn’t news, but his three-year struggle to break the housing color barrier was a landmark step in our nation’s movement toward racial equality.

Dr. Buckingham had moved from private practice in Meridian, Miss. to California in July 1945. He and his wife Mamie couldn’t find a home to their liking in the neighborhood known then as Berkeley’s “negro section.” So they bought one at 22 Bridge Road in a neighborhood near the historic Claremont Club and Spa.

But there was one snag — since 1928, the Claremont Improvement Club neighborhood association had a restrictive clause on the property reading “no part of said lands shall ever be used or occupied by persons of other than pure Caucasian blood.”

Club attorneys claimed the covenant served to protect homes and investments of area residents. “It is a question of economics, not racial evaluation,” they said.

Despite the restriction, Dr. Buckingham purchased the house from Oakland optometrist Benjamin Brudney for a reported $19,000. The Buckinghams moved into the premises during the night and resisted legal efforts to oust them.

The Club sued the Buckinghams — and Brudney — in early 1946. The defense was led by Bertam Edises, described in news accounts as “a University of California student-pacifist, national disarmament advocate, and National Labor Relations Board attorney.” Edises had mounted several previous suits against covenants. His argument? Using UC Berkeley anthropologists, including instructor Paul Radin, to prove that there is no such thing as a pure Caucasian, and therefore the covenants could neither be violated nor enforced. Edises threatened to file counter suits to force all plaintiffs to come into court and prove their race.

Not only is [this decision] a blow to me and my family, but to all minority groups in the State of California, the nation and a disgrace to the democratic citizens of Berkeley, the keystone of education, refinement and culture and home of the great University where these things are supposed to exist… As a captain in the Medical Corps of the U.S. Army, I fought for democracy and I shall continue the fight.


Despite the injunction, Mrs. Buckingham said she and her husband continued to live peacefully in their home for three years and stated “the neighbors have been very nice to us.”

The struggle was one of many that cascaded upwards to the U.S. Supreme Court, where on May 3, 1948 the St. Louis case of Shelley vs. Kraemer determined that “restrictive real estate agreements which bar Negroes from all-white neighborhoods cannot be enforced by State or Federal courts.” 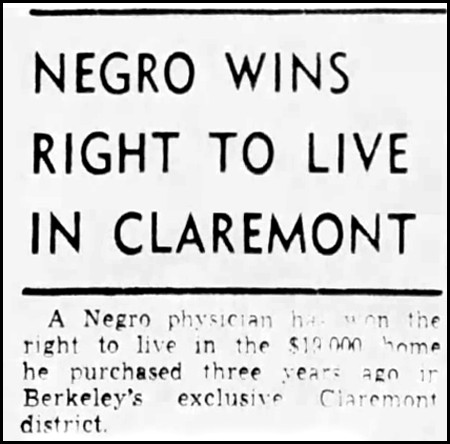 Upon hearing the news, Dr. Buckingham and his wife issued a statement, saying, “The recent unanimous decision…has proclaimed… the hopes and desires of all Americans who have fought, lived and died for democracy expressed in our Constitution.”

Despite Dr. Buckingham’s victory, housing discrimination persisted in the San Francisco Bay Area. Other African-American physicians, including Dr. Eugene Hickman and Dr. Ellamae Simmons, wrote of their difficulties in buying a home because of race in the late 1950s and early 1960s.

Dr. Buckingham returned to private practice around 1949 and passed away in 1968, but his legacy lives on.
Prev
Next