The Town Strikes Back

Oakland filed an antitrust lawsuit against the NFL, the Raiders, and the league’s other owners, seeking to recover damages resulting from what the city calls “the Raiders’ illegal move” to Las Vegas. 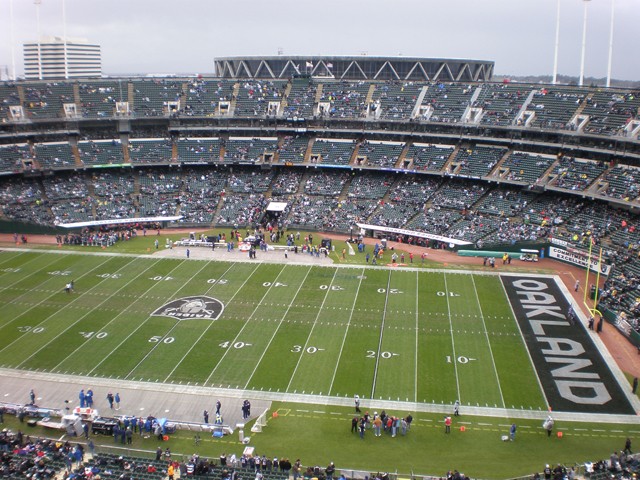 Give it a movie title: The Town Strikes Back.

And not a moment too soon.

After years of mistreatment from pro football owners, the city of Oakland on Tuesday filed a federal antitrust lawsuit against the NFL, Mark Davis’ Raiders, and the league’s other 31 owners. The suit seeks “to recover damages resulting from the Raiders’ illegal move to Las Vegas, including lost revenue, money that Oakland taxpayers invested in the Raiders and other costs,” said City Attorney Barbara Parker in a press release.

“The defendants brazenly violated federal antitrust law and the league’s own policies when they boycotted Oakland as a host city,” Parker added. “The Raiders’ illegal move lines the pockets of NFL owners and sticks Oakland, its residents, taxpayers and dedicated fans with the bill. The purpose of this lawsuit is to hold the defendants accountable and help to compensate Oakland for the damages the defendants’ unlawful actions have caused and will cause to the people of Oakland.”

A Raiders spokesman could not be immediately reached to comment for this report.

The suit was filed in the United States District Court for the Northern District of California, in partnership with the law firms of Berg & Androphy and Pearson, Simon & Warshaw, LLP. The firms are working on a contingency basis, so their fees and costs will be paid only from any recovery, according to the city.

“The NFL has a long history of misusing its tremendous market power in violation of antitrust laws,” said Jim Quinn, the lead attorney from Berg & Androphy. “This time, the NFL defendants violated their own bylaws in their effort to cash in on the Raiders’ move. Oakland is standing up to this unlawful and disloyal treatment by the league owners.”

Davis aims to move the Raiders into a new Sin City stadium by the fall of 2020. The leaders of two East Bay community groups — Griz Jones of Forever Oakland and Ray Bobbitt of the Oakland Coliseum Economic Impact and Legal Action Committee — hope the lawsuit stymies Davis’ plans.

Ever since the NFL owners approved the Vegas relocation in late March 2017, Jones and Bobbitt have worked on making this lawsuit a reality. First, they hired Quinn, who has defeated the NFL multiple times in court. Then they patiently — and successfully — lobbied Oakland City Council members and Mayor Libby Schaaf for more than a year.

“This suit is on behalf of all the people who are part of this great fan base in Oakland and the East Bay,” Bobbitt said. “As well as those in our community who depend on pro sports for their income, all the people who represent one of the nation’s best fan bases, and for the opportunity for the community to get to the table to decide the fate of the name, culture, and future of pro football in Oakland.”

The Oakland City Council authorized the lawsuit in July, with a motion that passed by a 7-0-1 margin. The vote’s one abstention came from Councilmember Lynette Gibson McElhaney.

Councilmember Rebecca Kaplan was an early supporter of the legal action because she believes the NFL’s system for relocating — which has recently allowed the Rams and Chargers to also leave their home cities — is “wrongful and improper.”

“I’m thrilled we are taking action to help protect our taxpayers,” Kaplan said in an email.

When rumors of the lawsuit swirled earlier this year, some suggested the Raiders would refuse to play in Oakland for the 2019 season. In such a case, Raiders have not yet indicated where the team would play. Rumored options include San Diego, Las Vegas, San Antonio, and Levi’s Stadium in Santa Clara.

Meanwhile, the lawsuit will not ask the court to prevent the Raiders’ move to Las Vegas or keep the team in Oakland. However, federal antitrust laws provide treble damages plus attorneys’ fees, so Oakland’s suit against the NFL and the Raiders “will seek a resolution for the maximum amount of damages available,” according to the city.

Those financial damages might produce enough leverage to allow Quinn and his team of attorneys to convince the NFL to leave the Raiders’ name, colors, and logo in their birthplace: Oakland.
All along, that’s been one of the main goals of grassroots leaders like Griz Jones.

“We’ve never stopped fighting for Oakland,” Jones said after the lawsuit announcement. “Quitting has never been an option.”

Chris De Benedetti writes a regular sports column for the Express.
Prev
Next