For the past several years, the Oakland Police Department has claimed that police officers are using substantially less force while making arrests. Supporting this assertion, OPD has published statistics showing a dramatic drop in the number of incidents in which an officer reported using any type of force, including drawing their guns on suspects. Between 2012 and 2017, officers reported a 75 percent decline in use of force.

But two months ago, a federal court-appointed independent monitor for the police department revealed that some use of force incidents weren't being reported by officers.

And in a brief filed today in federal court, two East Bay civil rights attorneys, Jim Chanin and John Burris, say that a new but unpublished analysis by monitor Robert Warshaw reveals that in the past year, OPD has been under-reporting its use of force cases.

It appears that OPD has experienced a decline in use of force instances, but that drop is not as dramatic as the department has claimed.

In an accompanying report to the federal judge overseeing the department, Oakland's city attorney and police largely concur that officers have recently been under-reporting use of force incidents.

According to Chanin and Burris, the under-reporting seems due in part to confusion within the department about whether or not drawing a gun on a person and holding it in a "low ready" position, but still with the barrel pointed at their lower extremities, actually constitutes a use of force.

Officers are required to report any incident in which they draw their gun and point it at someone as a "Level 4" use of force. Level 4 also includes striking a person with hands and feet, pressure holds, grabbing hair, and other weaponless attacks.

But the department's general order regarding use of force, a 34-page document, states on page 6 that if the gun is held in the "low ready" position, meaning at a 45-degree angle or less, it's not a use of force, and officers don't have to report it as such.

However, on page 24 of the same document, the "low ready" position is further defined as any situation in which an officer's gun "is pointed at a 45-degree angle or less and not at a person." [Bold in original.]

In other words, if an officer draws their gun and points it at a 45-degree angle toward the person's legs or feet, it constitutes a use of force. Until recently, many cops either weren't aware of this, or treated the rule as a loophole and didn't file a report. 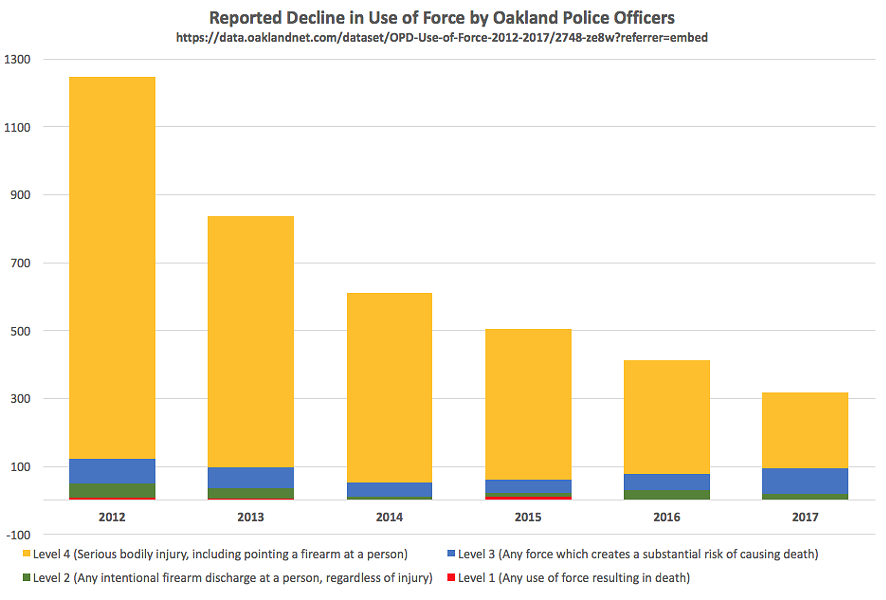 Warshaw wrote in a report two months ago that other types of use of force incidents are also not being properly reported by police officers. The monitoring team reviewed 29 cases and found six in which officers didn't properly record when and how they used force.

Since then, the monitoring team expanded their review to over 100 recent cases, according to the brief filed by Chanin and Burris. The team ultimately selected 38 for close examination because they involved charges of assault on an officer or obstructing and resisting arrest, and were therefore highly likely to have involved some type of use of force by the officers who carried out the arrest. Even so, none of these 38 cases had an accompanying use of force report that was completed by officers and their supervisors.

In 14 of these 38 cases, officers did, in fact, use some kind of force without reporting it, according to Warshaw's report, as described by Chanin and Burris.

Six of these incidents involved officers pointing firearms at people, while the other eight involved strikes and holds and other kinds of uses of force.

The monitoring team confirmed the officers' failure to report using force by reviewing body camera videos of the incidents.

The Oakland Police Department appears to agree that its use of force statistics have been under-reported recently.

In an accompanying brief also filed today in federal court, City Attorney Barbara Parker wrote that OPD's Office of Inspector General has been auditing the use of force reporting policies and practices, and that the OIG shares the same concerns "that the data and information gathered for the audit may reflect an under reporting of Level 4 uses of force, particularly with respect to the pointing of a firearm at a suspect."

In response, Police Chief Anne Kirkpatrick recently issued a directive that any pointing of a firearm at a person, even at their lower extremities, constitutes a use of force that must be reported.

Following a recent training on this updated policy, OPD officers have begun to report a "marked increase" in uses of force due to pointing their guns at people, the city attorney wrote.

Oakland's city attorney wrote that while this underreporting is "concerning", the problem was identified by the department's inspector general, "reflecting the ability of the Department to self-audit and take corrective action."

Chanin and Burris represent the plaintiffs in a lawsuit that placed OPD under the oversight of a federal judge 15 years ago and led to a comprehensive reform program known as the Negotiated Settlement Agreement. Among other things, the NSA requires OPD to accurately report when and how officers use force.
Prev
Next