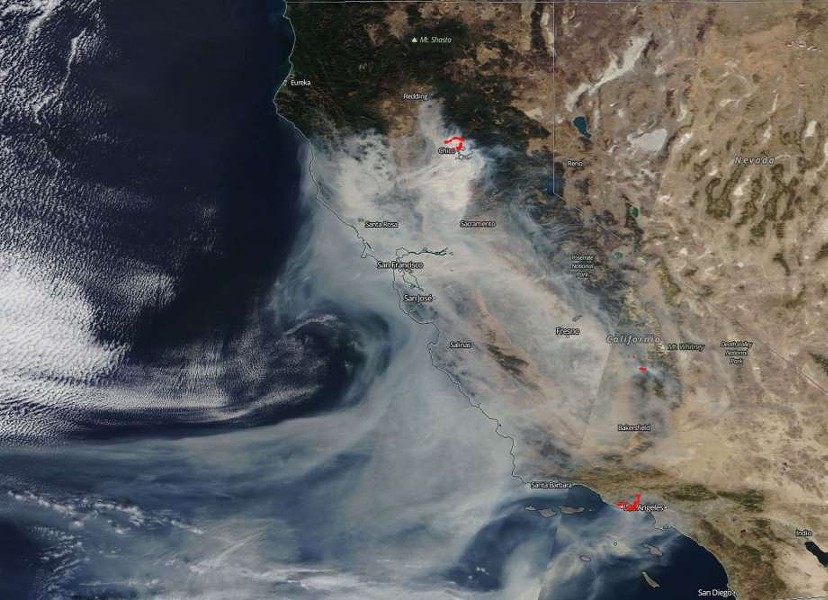 1. At least 200 people are still missing in the Camp fire, which has killed 48 people and destroyed 8,817 structures in the town of Paradise, the San Francisco Chronicle reports. The state’s deadliest and most destructive fire has grown to 130,000 acres and is only 35 percent contained. Smoke from the fire will continue to make air quality unhealthy in Northern California at least until Friday.

2. Josh Harder defeated incumbent House Republican Jeff Denham in California’s Central Valley in yet another pick up of a House seat by Democrats, the AP reports. In addition, in “the 45th District in Orange County, Democrat Katie Porter jumped into a 261-vote lead over Republican Rep. Mimi Walters, after trailing the incumbent since Election Day. And in the 39th District, anchored in Orange County, Democrat Gil Cisneros tightened the gap with Republican Young Kim.”

3. Catherine Baker, the only Bay Area Republican serving in the state Legislature, is also in peril of losing her East Bay Assembly seat and is now leading Democratic challenger Rebecca Bauer-Kahan by only 526 votes, reports Jon Kawamoto of the Bay Area News Group$. Alameda County has about 90,000 late mail-in and provisional ballots to count and Contra Costa County has about 108,000.

4. East Bay Assemblymember Tony Thurmond has widened his lead over charter school advocate Marshall Tuck in the state superintendent of schools race, and is now up by more than 74,000 votes, reports Louis Freedberg of the EdSource.

5. The Alameda City Council voted to ban the sale of flavored tobacco products on the Island, starting July 1, 2019, reports Peter Hegarty of the East Bay Times$. Flavored tobacco vaping devices have led to increase in tobacco use by young people.

6. The Bay Area may eliminate cash tolls on all bridges and replace them with electronic license-plate readers that will automatically bill commuters, reports Erin Baldassari of the East Bay Times$. Transportation officials are hoping the switch will reduce traffic congestion at bridge toll plazas.

7. Mayor Libby Schaaf is strongly criticizing Alameda County’s decision to only distribute less than a fifth of the $16 million in state grant money for homeless programs and services to Oakland, noting that Oakland is ground zero for the East Bay’s homeless population, reports Kimberly Veklerov of the San Francisco Chronicle$.

8. And the annual Berkeley Half Marathon scheduled for Sunday has been canceled because of air pollution from the Camp fire, reports Natalie Orenstein of Berkeleyside. “Runners who were expecting to take part in the 10K, 5K, and 1K races will now need to wait to hear whether the event will be rescheduled for the spring.”