Oakland firefighters warned their department's leaders six months ago that the Ice House townhouse project, which burned on Tuesday morning, was poorly secured. They asked if more could be done to "compel" the developer to prevent a devastating fire at the site, but it's unclear whether much was done to follow up on the warning.

After putting out a small fire inside one of the unfinished buildings at 1:41 a.m. on April 29, a firefighter sent an email to OFD Capt. Erik Logan and multiple other OFD commanders warning of "lax security at a building that is in its most vulnerable stage of construction," and requesting help resolving the issue.

The firefighter didn't say in the email, which was obtained by the Express, whether they felt it was caused by arson or accident. But an onsite security guard provided information that indicated the fire might have been accidentally caused by "squatters" taking shelter in the building.

The guard, according to the firefighter's email, "echoed our concerns at the lack of a more hardened or protected site," and he acknowledged that "he was the only guard on duty and that there is an ongoing issue with unauthorized persons coming and going from the area and possibly squatting."

The guard added that the building "had no fire protection in place," despite the exposed framing making it vulnerable to ignition by arson or accident. The guard also told OFD firefighters that there were no heat or motion detecting devices in use, and no security cameras visible, and furthermore that the 6-foot fence around the perimeter was not topped with razor wire, making it easy to climb over.

Views of the construction from April available on Google Maps confirm that the fence had no razor or barbed wire topping. There are also no security cameras visible, nor signs warning of security and surveillance, as is common at other construction sites. 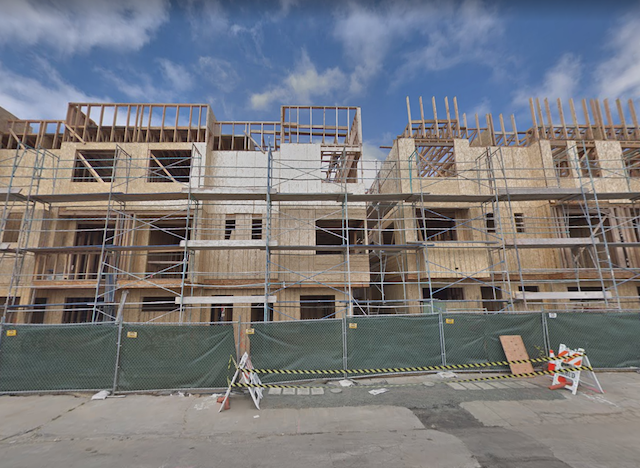 "Given the recent history of 'total loss' fires in buildings that were in the same phase of construction, and our obvious desire to prevent such an incident from happening again, is there any way to compel the developers, either through our fire prevention department, the building department or the city attorneys office, to do a better job at securing their site?" the firefighter asked OFD commanders in the email.

Phil Kerr, CEO of City Ventures, the Ice House's developer, told the Chronicle earlier this week that security cameras were installed in April, but he couldn't say whether it was before or after the smaller fire.

Federal and local investigators have yet to say what caused Tuesday's morning's fire, but Oakland Mayor Libby Schaaf called it an "attack" on new housing, alluding to a possible political motive.

Ray Roundtree, who leads the San Francisco division of the Bureau of Alcohol, Tobacco, Firearms, and Explosives, which is heading up the investigation, said in a press release yesterday that "ATF approaches these scenes without any preconceptions about what may have happened, and we allow the evidence to guide us to a conclusion."

The Ice House fire is not only the latest suspicious fire at a construction site in recent years, it's also the latest fire to consume a building where firefighters had previously warned their own command that something more should be done to avert a disaster.

For example, firefighters previously responded to two fires at the Miller Avenue Library building, which was completely destroyed by a third fire in February. The city did not fully secure the site, and as a result, it was completely destroyed. Firefighters also attempted to warn fire inspectors city officials about safety problems inside the San Pablo Avenue halfway house that burned in March 2017 over a year before a fire erupted there, but little was done. The March 2017 fire killed four inside the San Pablo halfway house.
Prev
Next