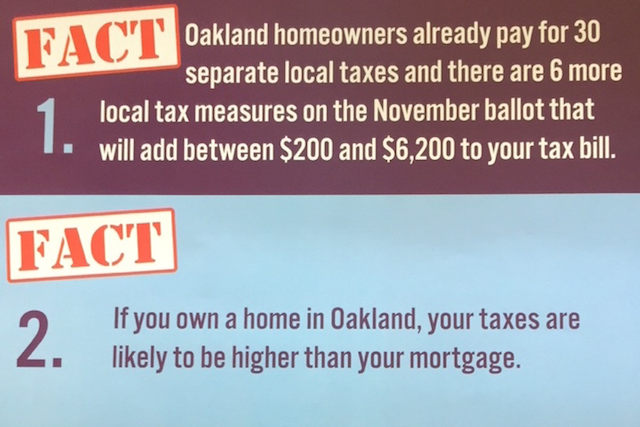 Today, Oakland Councilmember Dan Kalb filed an ethics complaint against the group alleging that the mailers are in violation state and local campaign laws because they appear to take aim against three real estate tax measures on the Nov. 6 ballot without disclosing the source of funds used to pay for them.

The mailers are part of a "series" which purport to objectively describe "facts" about Oakland's finances.

The first in the series stated that Oakland ranks 479 out of 482 California cities in terms of its "financial stability," that the city owes over $1.6 billion in unfunded pension costs, among financial problems. It's not clear where the association came up with this claim.

The first mailer doesn't mention the election in any way.

But the second and third mailer in the series do mention the election, stating: "There are 6 more local tax measures on the November ballot that will add between $200 and $6,200 to you tax bill."

This appears to be a reference to the City of Oakland Measures AA, W, and X. (There are three other tax measures on Oakland's ballot, but they're for other government agencies, not the city.)

Measure AA is a $198 parcel tax to fund early childhood education, while Measure W is a vacant property tax, and Measure X would adjust the existing real estate transfer tax so that mostly commercial properties and homes sold for over $2 million pay higher rates. Kalb wrote Measure X and has registered a committee to campaign in support of it.

Kalb alleged in his complaint that the Alameda County Taxpayers Association is trying to take advantage of a legal "loophole" that states that only communications that expressly advocate support or opposition of a particular candidate or measure are subject to campaign finance and disclosure rules.

But Kalb cited another section of the state Political Reform Act that requires groups to register campaign committees and disclose sources of money if their communications with voters "taken as a whole and in context, unambiguously urges a particular result in an election."

According to Kalb, the mention of the six tax measures on Oakland's ballot alongside the critical statements about the city's financial situation within a few weeks of the election amounts to an independent campaign expenditure in opposition of the tax measures that should be subjected to sunlight.

"They are not really election materials," Crawley said in an interview several days ago, before Kalb filed the complaint. "We decided what we really need to do is wake up the citizens of Oakland and get them thinking and scrutinizing taxes and city debt and city procedures, and since we have an election and everyone is paying attention, this was an excellent time to start."

Crawley said his group didn't form a campaign committee because the mailers are a general education effort. He added that they were paid for out of due of the ACTA's members.

"If you read those fliers there isn’t a single mention of any particular ballot measure or candidate."

Kalb submitted his complaint to the city's Public Ethics Commission but wrote that he also intends to file a complaint with the state Fair Political Practices Commission.
Prev
Next