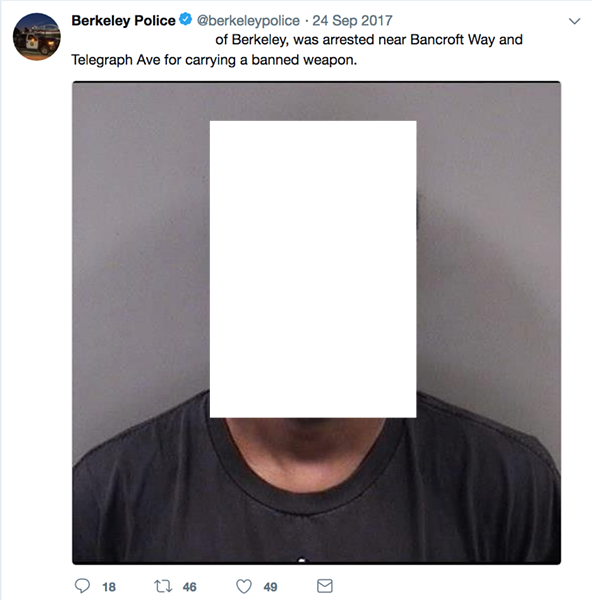 Last year, white supremacists, fascists, and other hate groups staged rallies in downtown Berkeley, leading to bloody street brawls with the anti-fascists who confronted them.

The events were depicted on social media as chaotic, with the police seemingly outnumbered and rarely intervening. Critics accused the Berkeley police of not doing enough to prevent violence, and some far-right activists even claimed that the Berkeley police were part of a conspiracy with UC Berkeley to silence political speech from conservatives.

In response, Berkeley officials devised a plan to use social media to "create a counternarrative" that the police were, in fact, confiscating weapons and making arrests. One way they attempted to spread this counternarrative was by rapidly tweeting out the mug shots, names, and cities of residence of people arrested at the rallies.

In recent internal city emails, the practice was referred to as the "info flow from jail to Twitter."

Some city officials believe the use of Twitter was justified and helped keep the city safe.


Tonight the Berkeley City Council will consider whether to adopt a formal policy barring the police from posting people's photos on social media. tweet this

"What we did during these protests was framed within very exceptional circumstances," said Matthai Chakko, a city spokesperson. "I don’t know of any city in the country that’s had such an exceptional intensity of violence focused on it."

But civil rights advocates say that the city's plan to use social media to dissuade people from showing up to fight ended up "doxxing" dozens of people, and that nearly all of them were counter-protesters who were in Berkeley to oppose the white supremacists. These individuals were later targeted by racist hate groups with threats of violence.

Doxxing is a practice whereby personal and private information is shared on the internet with the goal of damaging that individual's sense of privacy and exposing them to threats, actual violence, identity theft, and other harms.

Many of those who had their faces, names, and other information shared on Twitter by BPD were never charged with a crime, according to a search of court records.

The Berkeley police have come under intensifying criticism for using social media in this manner.

Chakko said that the tactic recently became a distraction and that the police won't be doing it at the next protest. But he defended the tactic as a successful means of "managing" the violent events of the past year.

Even so, tonight the Berkeley City Council will consider whether to adopt a formal policy barring the police from posting the photos of people on social media, unless they pose an imminent threat to public safety. (See Item 29 on the agenda.)

Berkeley Councilmembers Cheryl Davila, Kate Harrison, and Mayor Jesse Arreguin wrote in their proposed new policy that, "Doxing has resulted in threats to people’s children and families, and even putting 'bounties' on their heads. Though these photos were later removed due to political pressure and international criticism of Berkeley, the damage was done."

The police tweeted out mug shots and names of protesters as recently as Aug. 4, when another right-wing demonstration drew a counter protest, but these tweets were later deleted. Some photos of protesters arrested last year remain on the Berkeley Police Department's Twitter feed.

City records recently released through a Public Records Act request and shared with the Express show that the Berkeley police and city manager adopted the policy of rapidly tweeting out mug shots, names, and cities of residence of protesters as a means of trying to change the narrative about the City's ability to enforce laws and maintain control.

The police and city manager, according to documents reviewed by the Express, were concerned about news reports that they hadn't prevented fights between white nationalists and anti-fascists.

According to a document titled "BPD Twitter protocol for mug shots," there was only one broken window and no injuries of anyone who didn't attend the protests between March 4 and September 28 of last year, but "despite these successes, instigators continued to push a narrative that conflict in Berkeley was necessary [sic] due to lack of BPD presence."

Berkeley officials were worried that the cycle of confrontations between right and left would continue unless they could change this perception.

Internally, police and other city officials cited the "unusually deep and broad publication and attention" of the police department's tweets as evidence their strategy was working.

Police tweets of protesters mug shots and names received over 1.7 million impressions on Twitter (the number of times the tweets were viewed), according to an undated Berkeley policy document.

Civil rights attorneys who have reviewed the city's use of social media say the practice of publishing mug shots and names should be discontinued.

"This 'protocol' confirms what we suspected: that BPD's practice of publishing personal information and mugshots of anti-fascist and anti-racist counter-protesters is in no way related to ensuring public safety," Jay Kim, the executive director of the National Lawyers Guild San Francisco Chapter wrote in an email to the Express. "BPD's primary interest in creating a counter-narrative about its role and effectiveness as a police force actually had the impact of putting Berkeley residents in danger by exposing them to doxing by the far-right."

Chakko disputed the claim that most of those whose mug shots were tweeted by the police were anti-fascist and anti-racist protesters. He said the police made arrests and tweeted out people's photos regardless of ideology. "We made arrests based on what were violations of the law," he said. He added, "the easiest way to not have your booking photo posted is to not break the law."

"It's my understanding that they’ve only done this during protests," Councilmember Kate Harrison said about the use of Twitter to publish protesters' mug shots and names. "I’m very concerned about protecting free speech activity."

Harrison said there's a possibility that people won't show up to a protest to express their First Amendment rights if they believe they could end up having their face and name spread on Twitter, subjecting them to threats.

The Berkeley Police Department's policy on the release of public information and records, which was drafted in 2009, states that it is generally the department's policy to release copies of public records "unless release would endanger a private person" or "constitute an unwarranted invasion of privacy."

Whether or not the controversial tactic truly shifted the narrative around Berkeley is unclear. The far-right rallies, 10 of which were staged in Berkeley within a one-year period, may have petered out for other reasons.
Prev
Next