A third soon-to-open Tuff Shed camp will 'resolve' homelessness around the lake, but unsheltered residents are planning a protest. 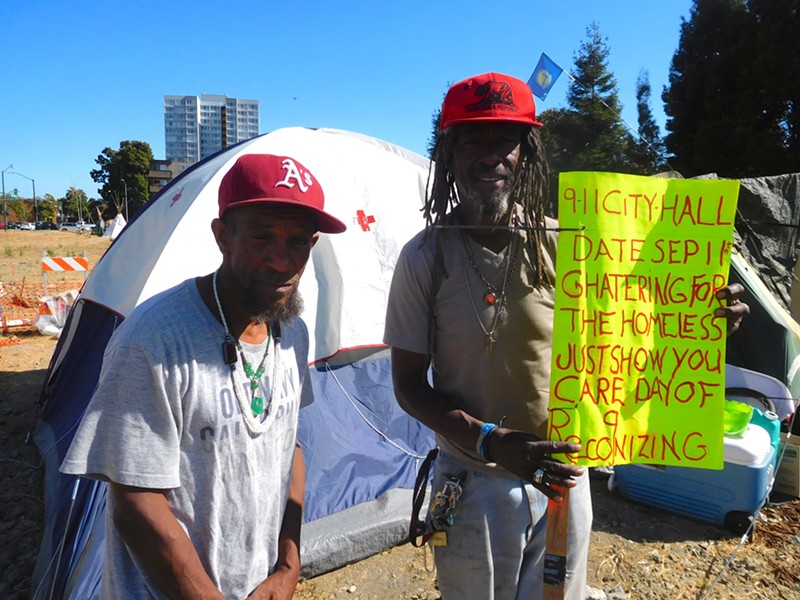 Oakland officials are moving forward with a plan to close all of the existing homeless camps around the perimeter of Lake Merritt and to ban camping in the parks. But some homeless people say they're organizing against the ban.

The closure of lake campsites, which could affect as many as 100 people, will be phased in starting this week, according to city officials.

At a meeting last Thursday at Peralta Park, which is located between the Kaiser Auditorium and Lake Merritt channel, city representatives told about a dozen homeless people in attendance that the Peralta Park camp will be closed first in order to make way for a third Tuff Shed camp run by a nonprofit organization.

But the city council must first allocate $457,384 for the new Tuff Shed location or else it won't be established, according to a city report that will be heard at this week's life enrichment committee.

The Tuff Shed camps, which are an initiative of Oakland Mayor Libby Schaaf, are sanctioned campsites that can accommodate up to 40 people in 20 small prefabricated, insulated sheds. The city provides round-the-clock security while social workers try to place residents into longer-term affordable housing. The camps have electricity and are served by mobile shower and grooming buses.

Some unsheltered people who attended the meeting last week at Peralta Park inquired about how to get into the Tuff Shed camp and seemed optimistic. Being able to safely store their belongings behind lock and key, and distance themselves from the streets where thieves frequently pilfer camps and sometimes attack people, is a valuable service, they said.

But others were critical of the announcement. One man called the Tuff Shed program a “concentration camp.” Others said the Tuff Shed camps look like jails.

Talia Rubin of Oakland's Human Services Department told homeless residents who attended the meeting that the closure of the camps around the entire perimeter of Lake Merritt is a “geographic intervention.” She said residents of that camp will have up to 10 days to decide if they want to obtain a space in the new Tuff Shed camp. If not, they'll have to move.

One person at the meeting remarked that the plan to close all the homeless camps around the lake was happening just before the November election in which Mayor Schaaf and District 2 Councilmember Abel Guillen are running for reelection.

“What do you have to say about that?" the person pointedly questioned city officials.

“I don't serve at the pleasure of the mayor,” said Rubin. “That's what I have to say about that.”

Last week, the city posted notices deeming the camp at Peralta Park “illegal” and ordering residents to vacate by September 13.

City Councilmember Abel Guillen, who represents the neighborhoods on the eastern side of Lake Merritt, sent an email last week explaining that once the new Tuff Shed camp by the Kaiser Auditorium opens "and alternative shelter is available to homeless campers in the parklands around Lake Merritt, the City will enforce the 'no camping' rules there."

But on Sunday, several homeless people who are living around Lake Merritt said they haven't been informed yet about the city's plans, and that they're unlikely to accept a space in the new Tuff Shed site.

“We know not everyone can move in when we open,” Rubin, of the human services department, said in response to questions about the capacity of the Tuff Shed camp from the Peralta Park residents last week.

“Fuck the sheds,” said a man who goes by the name Touché and lives under the oak trees on the north side of the lake.

Touché said there are probably around 100 homeless people camping around the lake, more than double what the city's Tuff Shed camp will accommodate.

"They should let them keep their tents," said a woman visiting Touché's campsite who didn't provide her name. She added that some homeless people have been institutionalized in prisons, jails, and mental health facilities, and that the Tuff Shed camps can trigger them in harmful ways.

Touché said nonprofit outreach workers came by his campsite about two weeks ago to inform him of the city's plan to ban camping around the lake. He said he'll likely move to another part of the city instead of the Tuff Sheds.

“They're too controlling,” he said.

A young man named Abdullah who lives in a circle of trees on the north side of Lake Merritt said he prefers being alone in the park because it's safer than living near the freeways where drug trafficking and violence sometimes occurs. He added he did not want to move into the Tuff Shed camp.

At Snow Park, where about 15 people live, several residents also said the city hadn't informed them about the plan to ban camping around the lake. When told of the plan, they said they feel like the city is interested in creating the perception of clean parks, rather than actually assisting the homeless.

Prestovich acknowledged that a fire recently tore through the camp, but he said it was started by several people who had moved in just a few weeks before, and they left right after the blaze erupted. He said the camp has otherwise been a safe space where residents have been able to look out for one another. He and four other men who sat talking under the trees on Sunday said that if the city wants to help, it could clean the portable toilet at Snow Park.

"It hasn't been cleaned in two months," said one man. The toilet is currently covered in graffiti and filled with trash.

Some homeless residents are organizing against the city's proposed camping ban around the lake and are calling for more resources to go directly to them, not to the nonprofits that run the Tuff Shed program.

Nino Parker lives on the E. 12th Street Remainder Parcel in a camp made up of seniors, with strict rules against using hard drugs. Parker has been rallying homeless residents to attend a meeting of the city council's life enrichment committee on Tuesday to speak out against the ban, and demand more assistance for the unsheltered.

“There's more people than sheds,” said Parker. Oakland's homeless population was estimated to have surpassed 2,761 last year, with 1,902 people unsheltered on any given night. The city's Tuff Shed program currently has spaces for only about 80 people.

Parker said the city's efforts are appreciated, but the evictions are counterproductive unless there's enough shelter for everyone. He described the Tuff Shed program as a "vehicle" to remove large homeless camps rather than an actual transitional housing program to address the city's shelter crisis.

"Here's where the evictions have to stop," Parker said. "If you have nowhere to put someone, then your vehicle to remove them ends, because at that point, you're just pushing people around the streets."

Residents of other camps say they're mobilizing to protest against the city's camping ban, but a sense of frustrated resignation also reigns.

"If this protest doesn't work, what do we do, lay down in front of the trucks like Tiananmen Square?” asked Prestovich.

Correction: the original version of this story stated that the Tuff Sheds are uninsulated. The sheds at the Northgate Avenue camp are, in fact, insulated.
Prev
Next