Over 1,000 people gathered at the MacArthur BART Station yesterday to mourn Nia Wilson, the 18-year-old woman who was stabbed to death on Sunday night on a train platform by John Lee Cowell in a vicious act that police described as a prison-style slaying.

Wilson's sister Latifah was also wounded by Cowell. He was apprehended by the police yesterday afternoon.

Although police say Cowell's motive is still unknown, the mood at yesterday's vigil and protest was that it was most likely a hate crime.

The Wilson sisters are Black, and Cowell, who was recently released from state prison, is white.

Hate crimes have been on the rise in the East Bay and statewide, and anti-Black bias is the largest category of hate crime motives. Furthermore, the attack happened in the context of a rising white supremacist movement across the nation.

Rumors that a group of white supremacists had planned a meetup at an Uptown Oakland bar yesterday heightened people's sense that the stabbing was racially motivated.

"A Black child was murdered by a white man," the prominent activist and Oakland mayoral candidate Cat Brooks told those gathered at MacArthur BART Station.

Others spoke in more structural terms about Black Oaklanders being under attack by the forces of gentrification and many types of violence, including deadly conflicts within the Black community, as well as the looming threat of white racists and police brutality. 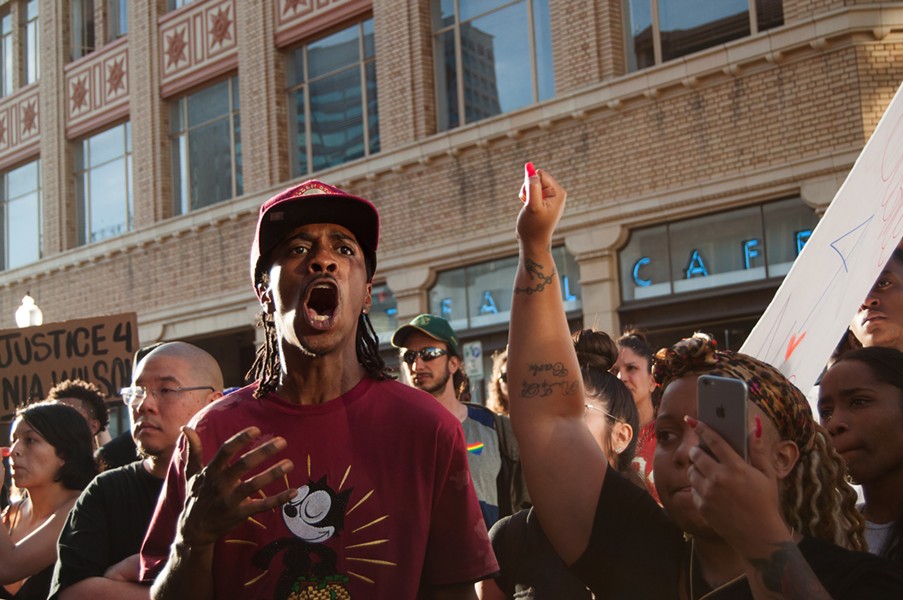 "They're trying to take Oakland from us, but we need to tell them, white supremacy ain't happening," Mya Whitaker, a candidate for Oakland City Council, said in a brief speech at the vigil.

The gathering, at times sorrowful and at other times boiling with urgency and anger, was attended by several members of the Oakland City Council, including Desley Brooks, Rebecca Kaplan, Lynette Gibson McElhaney, and Dan Kalb. After leaving the BART station, over 1,000 people marched south on Telegraph Avenue past new mid-rise apartment buildings that are rapidly changing the city's landscape. Some zipped through the crowd on electric scooters while others rode wheelies on bikes.

Wilson's godfather Daryle Allums, who has campaigned for years to stop violence within the Black community, helped organize yesterday's vigil and protest. Allums said at a press conference earlier in the day that "we don't know if it was racist, we don't know if it was random" about Cowell's motive for attacking the Wilson sisters. He asked for the Black community to "stand down" until the facts are known.

The demonstrators made their way to Make Westing, the bar where white supremacists were rumored to be meeting, but the bar's owner had earlier declared the venue off-limits to hate groups and instead organized a fundraiser with other local businesses to benefit social justice causes. Not long after reaching the bar, a fight broke out across the street when a small group of white men walked through the rally. Police separated the groups and appeared to arrest several protesters while escorting the men out of the area.

At that point, the protest turned against the police. Several of the Oakland cops on the skirmish lines with demonstrators have killed Black and Latino men in controversial police shootings. In recent years, OPD has dramatically reduced the number of officer-involved shootings and use of force, but the department still has a contentious relationship with the city's Black community.

Last week, a community forum organized by the police and Oakland Mayor Libby Schaaf turned into a shouting match at several points as mostly Black members of the community vented their frustration about being racially profiled by law enforcement.

I'm not sure why, but this Oakland police officer chased down a man on his motorcycle, nearly ran him over, and then multiple other officers arrested the man.
At the #SayHerName Nia Wilson protest. pic.twitter.com/zVOOouzX0O


After the police made two arrests, protesters threw M-80 firecrackers behind police lines. During one arrest, an officer on a dirt bike ran down a man to allow other officers to detain him. The Oakland police later reported using a "chemical agent" against the protesters, but the department didn't clarify what kind of chemical this was.

Throughout the afternoon, protesters spoke of the need to channel the rally's energy into long-term change.

By almost every measure, Oakland's Black residents are worse off than other racial groups and endure levels and types of trauma rarely felt in other communities. Fatal violence is among the starkest of these inequalities.

Out of the 71 homicides last year for which the race of the victim was known, 54 of the victims were Black, according to the recently released Oakland equity indicators report. By comparison, only 4 white people were homicide victims last year, despite the fact that there are now more white than Black residents in the city.
Prev
Next