Security footage shows an altercation between the venue operator and a homeless man near Brick & Mortar Music Hall. 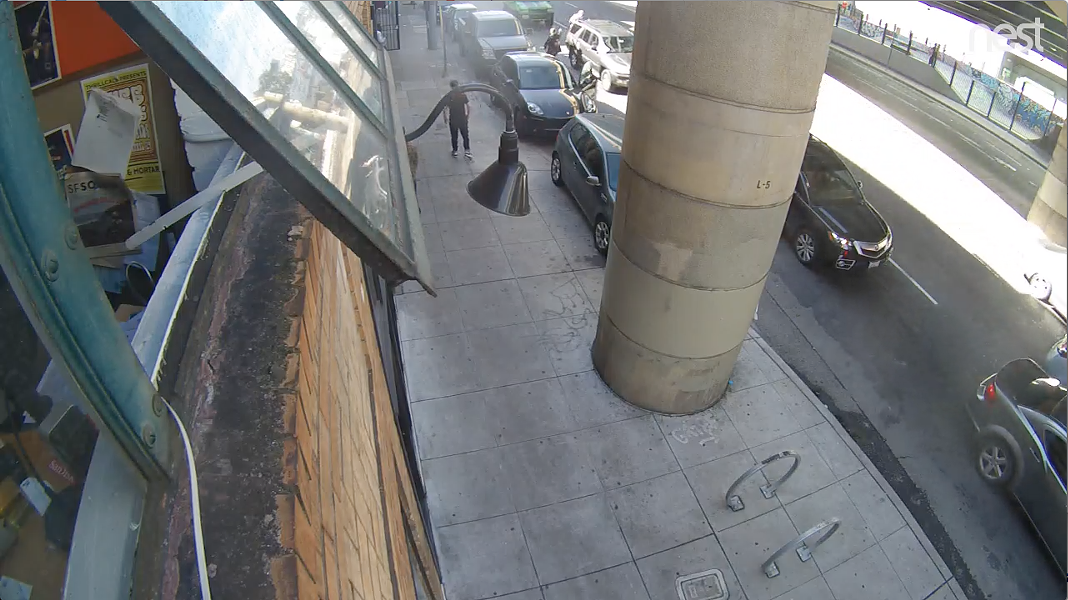 A video surfaced online yesterday showing a February altercation between a homeless man and Jason Perkins, of local venue collective Parish Entertainment Group, that some allege is evidence that Perkins was responsible for pepper-spraying a man and leaving threatening notes at a nearby homeless encampment in San Francisco.

Perkins said that the 31-second video — leaked security footage from his bar, The Crafty Fox — shows him fending off a “crazed, drugged-out dude,” but denies leaving the threatening notes blocks away that same afternoon. “There’s nothing to do with me and the fliers,” he said. “People say I’m anti-homeless. I’m not — I’m pro-safety.”

The video, time-stamped February 9, shows Perkins entering his car outside San Francisco venue Brick & Mortar Music Hall with the homeless man in pursuit. The man strikes Perkins’ car window and then Perkins exits the car and sprays the man with what he said was mace. The man then runs away. Twitter users are calling Perkins the “#ValenciaVigilante.”

In news reports from February, the man who was pepper-sprayed said it was not the first time he and other homeless people in the area had been harassed by his attacker.

The video is time-stamped shortly after 1 p.m. Shortly before 1:45 p.m. that day, according to San Francisco activist Kelley Cutler, a man left threatening notes and pepper-sprayed a man at a homeless encampment blocks from the scene of the video. The letter read, “If you are still here after dark tonight, the hunters will become the hunted. We will pound you, burn you, beat you and fuck you up if you are within 100 yards of the park starting after sun down tonight.” The letter was signed “The neighbors.”

Cutler said the San Francisco Police Department has been investigating the incident. SFPD did not respond to a request for comment on the status of the investigation.

For years, Perkins has been a partner with the Parish Entertainment Group (PEG), which, according to its website, controls The New Parish and the Rock Steady in Oakland and Brick & Mortar Music Hall and The Crafty Fox in San Francisco. But Perkins told the Express that, for the past two years, he’s been divesting from the businesses in anticipation of moving his family overseas.

Perkins’ current stake in the bars and venues under the PEG umbrella is unclear. According to filings with the Secretary of State, New Parish Entertainment changed ownership three days ago. Perkins dissolved “New Parish Entertainment Alameda, LLC” on January 23, 2017, and a new company called “The New Parish, LLC” was created on June 11, with the agent for service listed as Daniel Serot, a Walnut Creek-based attorney.

Today, the New Parish tweeted and then deleted a statement: “[Perkins] no longer owns the New Parish.” Perkins said the venue is being sold, but declined to name the buyer.

Perkins also provided an official PEG statement confirming his divestment from the New Parish. “An ex-employee is attempting to link this incident to some written threat against the homeless,” it reads. “At no point did anyone working in our company issue a threat against the Homeless. This is a complete falsehood.”

The day before the threatening notes appeared at the San Francisco homeless encampment in February, Perkins used similar language in a since-deleted Facebook post. “I’m so so sick of the thieving junkie motherfuckers in SF. … SFPD does jack as guys are hassling kids, trying to sell shit stolen out of someone’s car and needles everywhere here in the Mission…SF is becoming like NYC in the 70’s.”

In an update to the post the next day, he added that he met with a Mission District police captain after a “nasty run-in with a guy who broke a car window and then retreated to his tent” — a reference to the incident captured on video. The post concluded, “I get down about SF but then I get fired up and although confronting junkies is my style (not good). Working on the issue is also something I try to do and not just bitch (better approach).”

Shown a screenshot of the post taken in February by this writer, Perkins doubted its authenticity.

PEG’s statement also says, “The New Parish, Crafty Fox and Brick and Mortar will continue to be a space that books Social Justice artists and a place for social justice issues affecting Oakland and San Francisco — we will not let the disturbed actions of one disgruntled former employee sway us from our mission.”

A concert headlined by rapper Mistah FAB benefitting anti-homelessness organizations The Village and East Oakland Collective is scheduled for June 24 at the New Parish.
Prev
Next