For 11 years, students from all over the world have gathered at Oakland International High to learn English and math, as they also learn to navigate new lives far from where they were born.

Chanthavy, 16, who left Cambodia in 2009 and learned English in Malaysia before arriving in the U.S. in 2014 with her mother and extended family, said she appreciates the school because it is immigrant-friendly and has partnered with a local food bank to occasionally offer nutritious items students can take home to their families.

“They understand our situation and they know that we need help and they provide it,” she said, as she worked on an essay about how experiencing violence can traumatize a person and change their perspectives about the world. (All student names were changed at the school’s request since many students are involved in immigration proceedings.)

The small alternative high school, which was the first of its kind in California when it opened in 2007, is one of 27 public schools or academies across the country that are part of the Internationals Network for Public Schools, which serve new immigrants — students who have recently come to the United States. A second California school is in San Francisco.

Now, other schools are looking to Oakland International as a model because of its innovative program serving these newcomer students, which includes a “full service community school” model that provides academic as well as physical and emotional supports to students. Last year 800 visitors came to the school, which attracts outside funding to provide small class sizes, teaching assistants and coaches for every teacher. Located in North Oakland, the school serves more than 400 students who as a group speak about three dozen languages. It is one of 14 high schools in the Oakland Unified School District, which enrolls about 37,100 students in the East Bay.

Last year’s visitors included 10 administrators from West Contra Costa Unified, based in nearby Richmond, which hopes to establish its own newcomer programs, said founding Principal Carmelita Reyes, who came up with the idea to start the Oakland campus.

Twenty-nine percent of students at the school are from Guatemala and 16 percent are from El Salvador. Many came as unaccompanied minors from Central America. They were trying “to get somewhere safe,” said Sailaja Suresh, who directs the school’s Learning Lab, which trains teachers to work with English learners. Others came to reunite with family members. 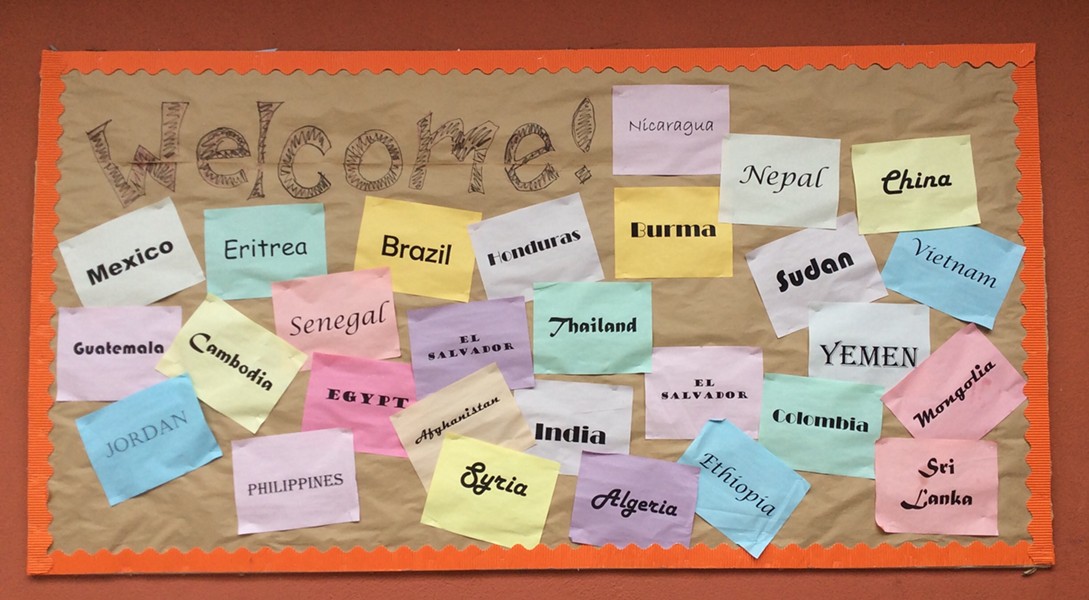 Carlos, 16, came alone from El Salvador two years ago knowing no English. Now, he’s planning a future that includes going to college.
“I like all the classes here,” said Carlos who hasn’t decided yet on a career path. “My favorite is math — learning to multiply and divide.”
Rosa, 14, who came to Oakland two years ago from El Salvador, wants to be a teacher. She’s working on her English and made some progress in middle school last year. “I like kids,” she said, as she scrutinized the fractions she and Carlos created by covering 16 out of 64 squares on a checker board with game pieces.

Math teacher David Hansen said most of his students have never played checkers but the game helps them learn math. He also teaches them to play checkers for fun.

Thirty-eight percent of the school’s students have missed two years or more of formal education. They attend classes for Students with Interrupted Formal Education, or SIFE, where they work to catch up. Carlos and Rosa were learning alongside other newcomer immigrants in Hansen’s SIFE math class for 9th and 10th-graders. All students at the school take seven classes, with most newcomers taking a regular English language arts class, history, math, science, advisory, “Survival English” and an elective. SIFE math is offered in an elective or advisory period for those who need it, Reyes said.

The goal is for the students to get to grade level in English and math and then take other courses they need to graduate from Oakland International.

Students miss school for a variety of reasons, Suresh said. Some have traveled such long distances to get to Oakland from their home countries that they couldn’t attend school along the way. Others had schooling interrupted by wars or because they were too poor to pay the school fees.

They work with counselors to create five-year graduation plans and can take summer school credit recovery courses. As they progress, they can also take after-school dual enrollment community college courses in English as a Second Language and math, which could allow them to enter college without remediation.

“We’re really trusting teachers to understand where they’re at,” she said, “and meet them where they are.”

Another challenge, Suresh said, is creating a curriculum that respects the fact that “our students are teenagers and are actually capable of quite complex thinking and opinions,” and helping them to “access those thoughts and articulate them” through teaching that is not “elementary style.”

The school’s curriculum is aligned with Common Core math and English language arts standards and most 11th-graders take the state’s standardized tests in those subjects. As English learners, most are not yet reading at grade level. About 3.3 percent of the 90 students who took the math test met state standards, including nearly 2.4 percent of the 84 English learners who took it.

In an 11th-grade English class, students recently worked on assignments designed to prepared them for the state tests, while also building their overall critical thinking and writing skills. 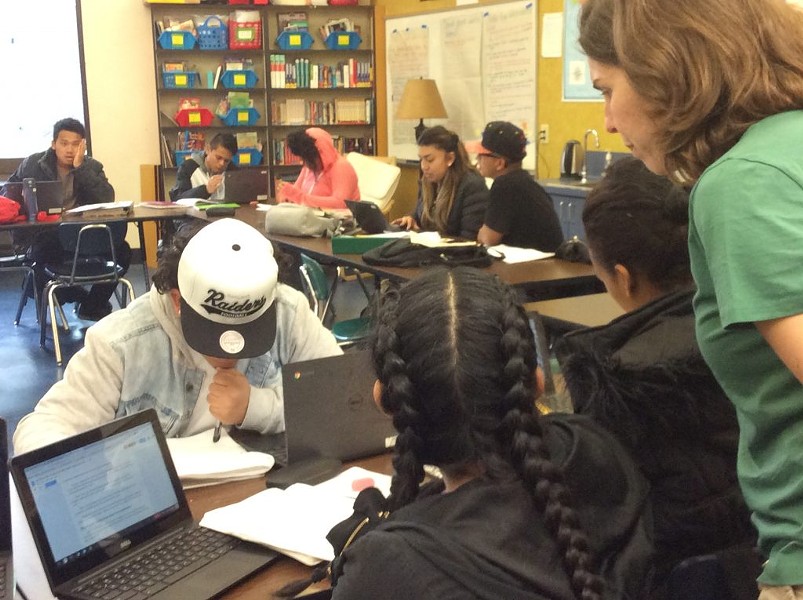 Survival English students, on the other hand, drew pictures and wrote sentences describing their identities on large paper puzzle pieces including details about where they came from and their families, favorite foods and religious beliefs.

Jose, 17, from Guatemala, wrote that his favorite food is pizza “because it is delicious.”

“The ingredients in pizza are cheese and tomatoes,” he wrote. “My mom makes pizza.”

Teacher Sara Stillman integrates literacy into her 10th grade graphic arts class by asking students to read passages from books that are relevant to their immigrant experiences. One of those books is “The Best We Could Do,” an illustrated memoir by Thi Bui, a public school teacher living in Berkeley who immigrated to the United States from Vietnam as part of a wave of Southeast Asian refugees known as “boat people.”

During a recent class, Stillman and her students discussed what the phrase “magic moment” meant to them, as they reflected on Bui’s recollection of looking up at the stars. One student said he recalled looking out the window and seeing blue sky and clouds on his journey from Jordan.

Stillman said a magic moment could also be “when you see someone for the first time in a long time when you get to the U.S.”

“And you feel so joyful and happy,” a boy chimed in.

One girl said her magic moment was when she saw her mom for the first time after being separated from her for 11 years.

Students enjoy reading Bui’s story because many can identify with the author’s scary journey and recall being hungry and relying on strangers for help, Stillman said.

As a “full service community school,” the campus raises outside funds and partners with organizations to meet students’ needs including eye clinics, guidance counselors and mental health professionals who speak multiple languages.

“Our school was designed to welcome kids whenever they came — whether it was the first day of school or April 15,” Reyes said, “to be a place that would support them academically and socially and emotionally.”

But over the past three years, the need for immigrant services has exceeded the school’s capacity. So, the district is providing newcomer services in five other schools — Castlemont, Fremont and Oakland high schools, Rudsdale Newcomer High and Bret Harte Middle School — with the help of a three-year $1.8 million grant through the California Newcomer Education and Well-Being project.

“The grant was written in large part to begin to replicate strong practices that are already in place at OIHS,” said district spokesman John Sasaki.

To help meet the demand for teachers to serve immigrants, the school launched its learning lab this year, creating a pipeline of teachers to serve newcomer students in partnership with the Reach Institute for School Leadership, an Oakland-based organization that offers a teacher certification program to teacher aides at the school with Bachelors’ Degrees. Reyes described the program as “one of the most exciting things this year” at the school.

“They are working in our classrooms during the day and getting their credentials at night,” Reyes said, referring to the 12 teachers in the first graduating class. “We’re going to be minting them and putting them out into the world as newcomer teachers.”