They allege that campaign donations were tied to a controversial housing project and violate the city's campaign finance law. 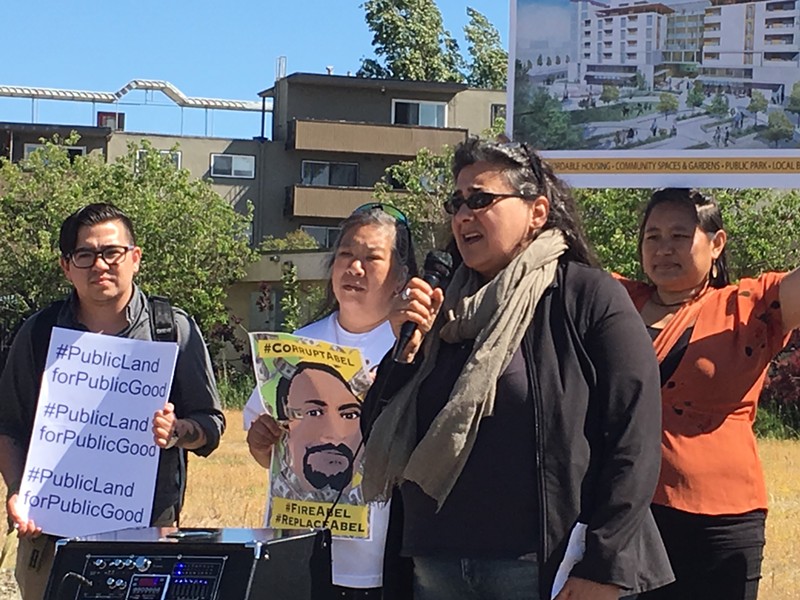 A group of housing activists — including those who opposed the controversial market-rate housing project at the E. 12th Street remainder parcel near Lake Merritt three years ago — filed a complaint with the Oakland Public Ethics Commission Wednesday against District 2 Councilmember Abel Guillen.

Members of the Oakland Justice Coalition, East 12th Coalition, the Eastlake United for Justice, along with Oakland civil rights attorney Dan Siegel, allege that Guillen accepted five campaign contributions totaling $1,800 from representatives who have ties to UrbanCore and East Bay Asian Local Development Corporation (EBALDC), the project’s developers. The contributions occurred while the city council was in the process of deliberating approval of the $5 million housing project, the group alleges.

Dunya Alwan of the Eastlake United for Justice, said the group first examined Guillen’s campaign finance records a month ago and made connections between UrbanCore, EBALDC, and their representatives, and Guillen. “It didn’t feel right,” said Alwan.

The groups allege that Guillen made at least four votes in favor of the controversial project between March 2015 and June 2017. Under Oakland’s campaign finance reform act, public officials are prohibited from voting on items related to their donors for two years. The campaign contributions the groups alleged violated city laws occurred between December 2014 and April 2017.

In a statement Wednesday night, Guillen denied the contributions were improper, while suggesting the ethics complaint filing is intended to benefit his likely re-election opponent this fall, Partnership for Working Families Executive Director Nikki Fortunato Bas.

“My Office Holder Account enjoys support from a broad cross-section of donors from all backgrounds and walks of life, and I am confident we have complied with all local donation regulations. I have not received any contributions for my office holder account or my re-election account from anyone who is employed by Urban Core,” Guillen said in a statement. “It is unfortunate that backers of my opponent have chosen to focus on false, politically motivated attacks rather than working on actual solutions to our housing, safety and infrastructure needs.”

“I want to set the record straight,” said Michael Johnson, president of UrbanCore. “UrbanCore is currently working in Oakland on two public-private partnership projects involving the City of Oakland. For that reason, we have not, at any time, contributed to Councilmember Guillén’s campaign. These accusations are completely false and unfounded.”

“EBALDC has a policy against making political donations. We respect the privacy of our staff and will not comment on donations that may have been made by individuals,” said EBALDC Executive Director Joshua Simon.

This project has been no stranger to controversy. The council first approved a proposed 24-story luxury tower of 298 market-rate apartments for the parcel located near Lake Merritt in June 2015. Questions, however, arose over the legality of the city’s no-bid sale of the property and whether it violated the state Surplus Land Act. Furthermore, housing activists pushed for additional affordable housing to be included on-site.

In May 2015, a council meeting was disrupted when activists rushed the dais and prevented a final vote on the all market-rate version of the project. The demonstration led to the meeting’s cancellation.

A few days later, a confidential legal memo from the Oakland City Attorney was leaked before the Oakland City Council could reconvene and take a final vote. As a result, the city council canceled exclusive negotiations with UrbanCore and put the project out to competitive bidding.

Several developers submitted bids on the site, but the city council again selected UrbanCore. However, UrbanCore teamed up with EBALDC and proposed building 108 affordable units as part of the 361-unit tower.

The project has been approved by the city, but the developer has yet to break ground. According to a July 2017 city staff report, the project is still in the design phase.
Prev
Next