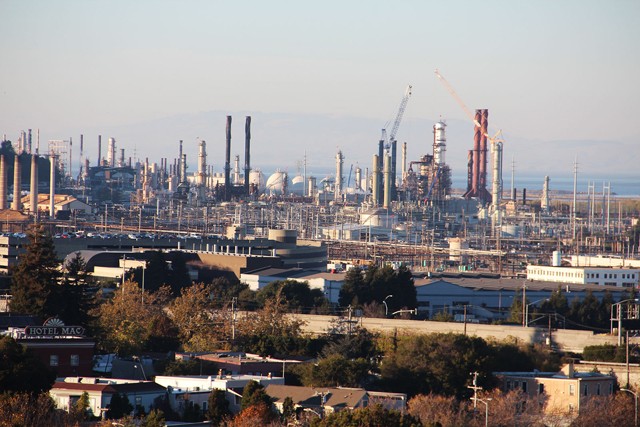 UC Berkeley’s plans for People’s Park will include housing for up to 1,000 students, as well as housing for homeless residents, open space, and a memorial to the park’s history. The university says there will also be on-site services such as “life-skills training” for people with a history of substance abuse or homelessness. The project is expected to be completed in four years. (San Francisco Chronicle)

Berkeley may become the first city in the nation to break ties with companies that support the Trump administration’s immigration policies. The city is considering stopping work with contractors that help federal immigration officials create databases and registries to target immigrants and religious minorities. Richmond and Alameda are considering similar measures. (Bloomberg)

Chevron has agreed to pay $5 million to the city of Richmond to settle a lawsuit over a refinery fire in 2012. The fire sent more than 15,000 people to the hospital with respiratory complaints and other symptoms. (East Bay Times)

A new study shows the lack of housing and explosive growth of high-paying jobs have exacerbated California’s housing crisis, especially in the Bay Area. Between 2011 and 2016, the state added just 171 homes for every 1,000 people. The study, commissioned by the San Francisco public policy group Next 10, also shows a growing economic divide. (East Bay Times)

A Richmond police officer used excessive force in the shooting death of unarmed 24-year-old Pedie Perez in 2014, a Citizen Police Review Commission found. The findings don’t bear any legal impact, but the commission hopes they could lead to policy changes. (East Bay Times)