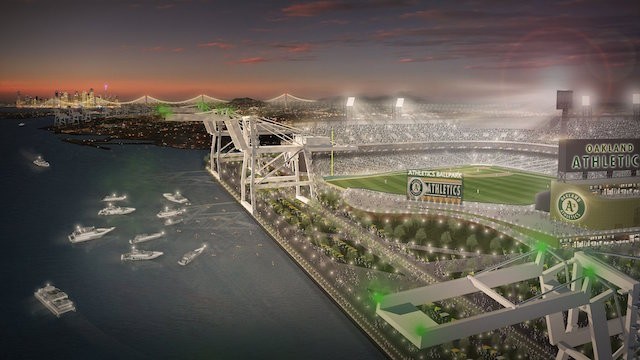 The Port of Oakland agreed to enter into exclusive negotiations with the A’s yesterday to explore the possibility of building a waterfront ballpark at Howard Terminal. The one-year agreement is an important first step to allow the team to study the economic feasibility and environmental, transportation, and accessibility issues at the 50-acre site. The team is also expected to enter exclusive negotiations with the city and Alameda County to study the Coliseum site as well. (East Bay Times)

A $730 million grant from the state would extend BART to the South Bay by 2026. But the 6.1-mile extension — which would go through downtown San Jose and into Santa Clara, with four stops along the way — relies on revenue from SB 1, which is being threatened by efforts to repeal the gas tax. (East Bay Times)

Downtown Berkeley and parts of East, West, and Downtown Oakland are among the areas considered “Opportunity Zones” by the U.S. Treasury Department, with the goal of encouraging investment in low-income areas by allowing those who invest there to defer capital gains taxes. (San Francisco Business Times)

In utilities news … Berkeley residents will have an option for a greener, cheaper electricity provider in the coming months. East Bay Community Energy plans to take over municipal and commercial accounts in June, and residential accounts in November. The default service will be 38 percent renewable and 47 percent carbon-free, and cost 1.5 percent less than PG&E. (Berkeleyside)

Electricity rates in Alameda are going up 1 percent beginning July 1 to improve infrastructure. The community-owned and locally operated system is also using the increase improve fairness for customers, by aligning rates for each customer class with the cost of providing electrical service. (East Bay Times)

PG&E was fined $97.5 million by the California Public Utilities Commission yesterday for improper back-channel communications following the 2010 San Bruno pipeline disaster. The utility company won’t be able to pass on the fines to customers, nor can it deduct those penalties from its taxes. (San Francisco Chronicle)

Union City has moved toward approving its first cannabis business. If approved, the 12,000-square-foot facility at 30540 Union City Blvd., operated by Eden Holdings LLC, would include a retail dispensary, as well as space for growing, manufacturing, and distribution. A vote for final approval is expected in the coming months. (East Bay Times)

The University of California has put off a vote on a possible tuition hike, pressing the state to increase funding instead. But even if the university secures the $140 million it’s looking for, it may still approve a “modest” tuition increase for the upcoming school year. (Daily Cal)

New fish ladders in Alameda Creek could bring salmon and steelhead back to the Fremont-area watershed after being denied access to their natural spawning grounds for decades. (East Bay Times)