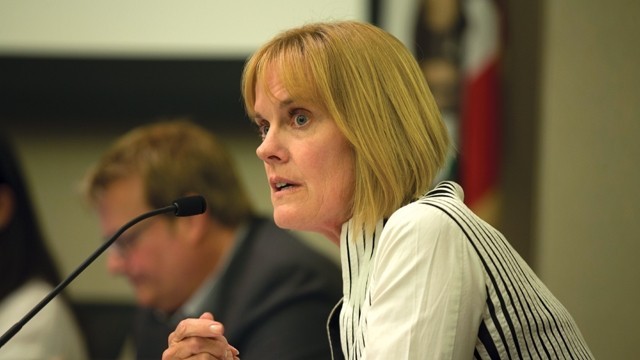 At a closed door session last night, the Alameda City Council decided not to fire embattled City Manager Jill Keimach, who admitted she recorded Councilmembers Jim Oddie and Malia Vella without their knowledge (which is illegal under California law). The council also decided that an independent investigation into Keimach’s allegations that she was politically pressured by those councilmembers — her reasoning for the illegal recording — to select a union-backed fire chief will be publicly released May 2. Also, about that illegal recording, the council directed the city attorney to refer the case to the Alameda County District Attorney’s Office. (East Bay Times, EB Citizen)

The U.S. Supreme Court struck down part of a federal law that makes it easier to deport immigrants who have been convicted of crimes, saying it’s too vague to be enforced. The 5-4 decision — the result of Trump appointee Justice Neil Gorsuch aligning unusually with the four liberal justices — only applies to a category of crimes that carry a prison term of more than a year but don't fit comfortably in the list of “aggravated felonies” that can lead to deportation. (SFGate)

Plans are underway for a village of tiny homes for homeless youth at the site of Ohmega Salvage in West Berkeley. The proposal calls for 25 homes for homeless and low-income young people and is part of a larger project by Berkeley nonprofit Youth Spirit Awards for 100 homes in Berkeley to be built by volunteers and homeless youth. Ohmega Salvage is consolidating its operations and renting out one of its two lots on San Pablo Avenue due to rising business costs and declining sales. (Berkeleyside)

UC Berkeley is constructing a new eight-floor dorm at Bancroft Way and Dana Street. When completed, the new dorm will house more than 750 undergrads and will be called David Blackwell Hall, after the first African American professor to gain tenure at the university. It’s expected to open in August. Meanwhile, administrators are also signing leases for student beds at new buildings and are considering developing other sites — including the Upper Hearst Parking Structure — for student housing. (East Bay Times)

Hundreds of Oakland residents packed a town hall meeting last night to grill city officials about the problem of illegal dumping in their neighborhoods. Among their complaints: That cleanup crews prioritize affluent, predominantly white parts of the city where residents make the most complaints as opposed to the flatlands neighborhoods where garbage is a bigger problem. Councilmember Abel Guillen told the gathering that he would advocate for adding another illegal dumping cleanup crew next month when budget revisions are made. (East Bay Express)

Several East Bay cities are considering establishing ordinances that would ban companies that gather data for ICE from bidding on city contracts. Civil rights organizations that drafted the measure want to cut off support for the Trump administration’s campaign of ramping up deportations and to undermine future efforts to round up people based on their (perceived) ethnicity, race, or religion. (East Bay Express)

The Temescal Telegraph Business Improvement District is soliciting community feedback on plans to remake the triangular parcel where Shattuck and Telegraph avenues intersect, otherwise known as Kasper’s Plaza. The idea is to turn the space into a pedestrian-friendly plaza not unlike Latham Square, improving traffic, promoting bike and pedestrian safety, and encouraging use as a gathering spot. The next community meeting will be held Wednesday, April 18, at Faith Presbyterian Church. (Hoodline)

The City of Berkeley will vote on whether to keep an emergency shelter open for another six weeks, at the cost of $90,000. The 10,000-square-foot facility can house 90 people and is located at 1925 Ninth Street, at University. (Daily Cal)

Oakland rapper Too $hort will not face criminal charges of sexual assault after the Los Angeles County District Attorney’s Office rejected the case, citing insufficient evidence. Teana Louis sued the rapper in January claiming he sexually assaulted her on multiple occasions while working together in a recording studio in 2016. (East Bay Times)

And, finally, The New York Times, the New Yorker, and The Washington Post won Pulitzer Prizes for their #MeToo-related reporting. Locally, the Santa Rosa Press Democrat won in the category of breaking news reporting for their coverage of the North Bay wildfires. And Kendrick Lamar became the first rapper to win in the music category for his album DAMN. The Pulitzer board called it “a virtuosic song collection unified by its vernacular authenticity and rhythmic dynamism that offers affecting vignettes capturing the complexity of modern African-American life.” (New York Times)