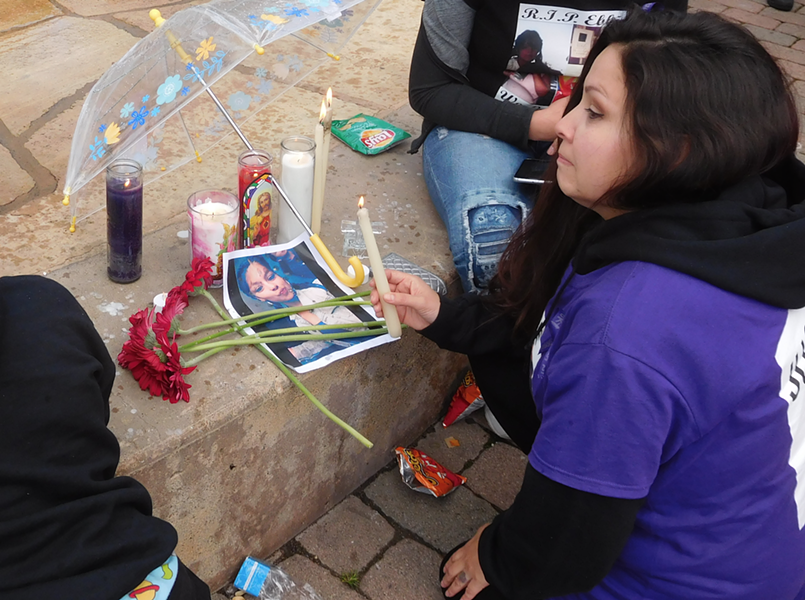 Family and friends of Elena "Ebbie" Mondragon gathered in Hayward last night to remember the 16-year-old girl who was shot and killed by Fremont police Detective Joel Hernandez and Sgt. Jeremy Miskella exactly one year ago.

According to the Alameda County District Attorney's Office, four police officers with the South Alameda County Major Crimes Task Force were attempting to arrest Rico Tiger, a 19-year-old man wanted for armed robbery, when they shot and killed Mondragon. Mondragon and her cousin had gone swimming with Tiger and another friend, but as they were leaving a pool in a Hayward apartment complex, the car they were traveling in was blocked by two unmarked vehicles carrying four heavily-armed plain-clothed police officers. Tiger, the driver, attempted to smash through the police barricade, but officers opened fire with AR-15 rifles. Mondragon was hit multiple times and died at a nearby hospital.

None of the police had activated a body camera to record the incident, but they said they shot into the moving car in self defense because Tiger was trying to run them over. Tiger allegedly killed an innocent bystander in a car accident the month before while fleeing the from the Oakland police. 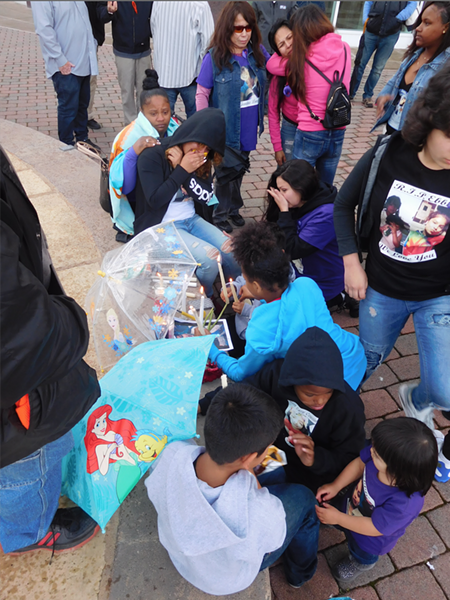 John Burris, an Oakland attorney representing the Mondragon family, said at a press conference earlier this week that police made "egregious tactical errors and contravened their training and basic common sense" by allowing the teens to get into a car before moving in to arrest Tiger, and then by opening fire on the vehicle.

The family's lawsuit alleges the city of Fremont's failure to discipline its police for the fatal shooting "demonstrates the existence of an entrenched culture" that tolerates improper detentions and arrests, and the use of excessive and deadly force.

At last night's memorial, Mondragon's family marked the one-year anniversary of her death.

"Ebbie was the glue that held this family together," said Michelle Mondragon, Elena's mother.

"I just want everybody to remember that Ebbie was the high spirit of our lives," said Evelina Mondragon, Elena's sister.

Christina Flores, Mondragon's aunt, criticized the police tactics that led to the shooting. "Another victim, the cops are going to take somebody else from us, from this world, that are innocent," she said during yesterday's vigil. "But I just want everybody to remember her name. Elena Mondragon. Ebbie. Our Ebbie."

The district attorney's office investigated the police shooting and cleared officers of any wrongdoing. But the Hayward Police Department, which was also tasked with investigating whether or not the shooting was lawful, has yet to complete its full report.

Tiger was subsequently charged with attempted murder against two of the officers for allegedly trying to run them down with the car. He has also been charged with murder in Mondragon's death.

But the Mondragon family said they believe that the Fremont police are also responsible, but so far, they have avoided any accountability for their role in the incident.

"We're here against justice not being served," said Miguel Minjares, Mondragon's uncle. "We're here for accountability, not just for my niece, not just my family member, but for the victims of this kind of crime, and it is a kind of crime. Just because you're the police doesn't mean they don't commit murder."