Plus, the state Supreme Court strikes down 50-year prison sentences for youths tried as adults. 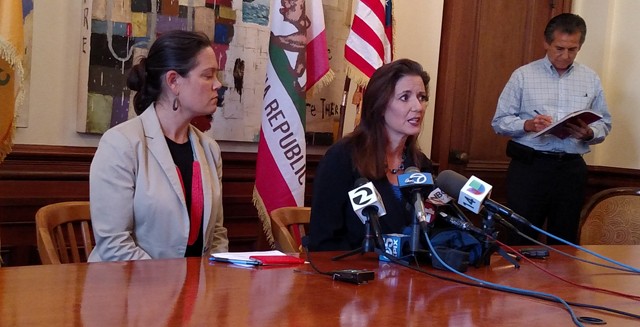 1. Oakland Mayor Libby Schaaf has received death threats from members of the far right because of her decision to issue a public warning over the weekend about pending immigration sweeps by the U.S. Immigration and Enforcement Agency (ICE), reports David DeBolt of the East Bay Times$. Schaaf is sticking by her decision to warn people about the possible ICE raids. But some of Schaaf's left-wing political opponents, including Councilmember Rebecca Kaplan, are also criticizing her, saying she should have kept her knowledge of the raids secret from the public and only informed pro-immigration groups so as to not to scare people.

2. Two candidates have launched bids to unseat embattled Oakland Councilmember Desley Brooks, who has come under heavy criticism for costing the city $3.75 million in a legal judgment stemming from Brooks' assault on ex-Black Panther Elaine Brown, reports Steven Tavares of the East Bay Times$. The two candidates running against Brooks this year so far are Loren Taylor, an Oakland entrepreneur and 100 Black Men of the Bay Area board member, and Natasha Middleton, a management analyst for the Alameda County Probation Department.

3. The California Supreme Court has struck down 50-year prison sentences handed out to youths who are tried as adults for violent sex crimes, saying the lengthy punishments amount to life without parole, reports Bob Egelko of the San Francisco Chronicle. "A lawful sentence must offer hope of restoration ... a chance for fulfillment outside prison walls, and a chance for reconciliation with society," wrote Justice Goodwin Liu in the 4-3 ruling.

4. California has given the greenlight to driverless cars and they could hit the road for test runs as early as April 2, reports Carolyn Said of the San Francisco Chronicle. Under the state's program, companies will be able to begin testing autonomous vehicles - with no backup drivers. "Companies must self-certify that their cars can handle themselves without a human in the driver's seat, and they must comply with all federal safety regulations."

5. And Oakland's iconic Mormon Temple has closed for a year's worth of renovations, reports Janis Mara for the East Bay Times$. The temple in the Oakland hills shuttered on Feb. 19.