The strike is scheduled to begin on Tuesday. And impact fees have generated just $478,000 so far. 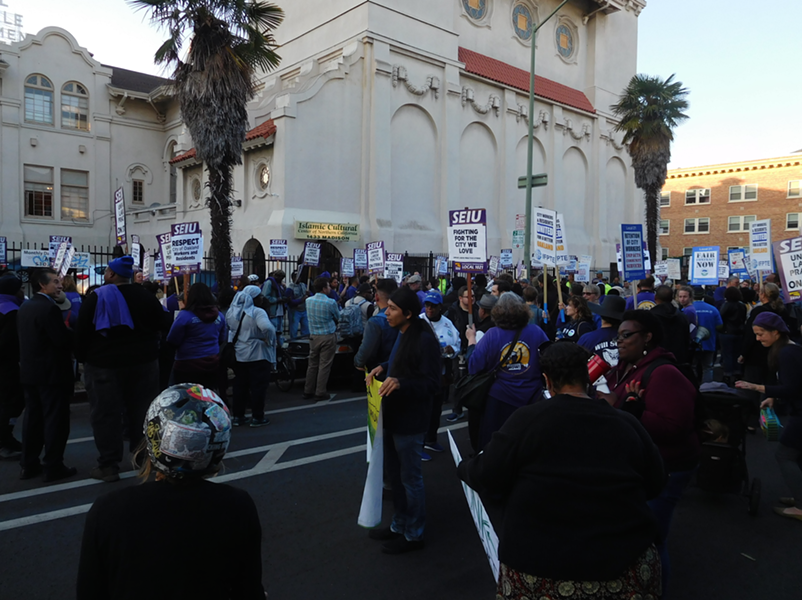 Strike: Oakland's largest unions informed city officials on Friday that they're planning to strike. The work stoppage is scheduled to begin on Tuesday, unless the unions and city strike a deal today.

If there is a strike, most city facilities and offices will be closed, and the unions, SEIU Local 1021, IFPTE Local 21, and IBEW 1245 — with 3,000 members aong them — say they plan to strike until they reach a deal with the city.

The looming strike comes after the city made its "best and final offer" to SEIU 1021 regarding pay and benefits: a wage increase of 4 percent, retroactive to July of this year, with another 2 percent gain possible. But workers only get the extra 2 percent if real tax revenues exceed projections in the adopted budgets over the next two years.

The other unions didn't get this same best and final offer and are still being offered pay increases of 2 percent, with a possible 2 percent bump if revenues exceed expectations.

The unions don't want to take a chance on getting a raise, and they also want increases that return some of the pay their members' gave up years ago during the recession.

But workers also say they're striking over unfair labor practices, including the city's understaffing of key departments, reliance on overtime to fill shifts, and the large numbers of temporary and part-time employees who do jobs that should be carried out by full-time employees.

Contract talks between the city and its unions got off to a bad start seven months ago and never really improved.

During the city council's budget hearings, the unions repeatedly pleaded with councilmembers to include funding for pay raises in the adopted budget. The council, however, didn't include the amount requested by the unions, hewing closer to Mayor Libby Schaaf's budget.

Oakland City workers took over #oakmtg and are chanting "hey hey, ho ho, Libby Schaaf has got to go." pic.twitter.com/RDI8xbqPeH

Oakland officials say the city's revenues remain volatile and limited, and that they don't want to over-commit the city financially through the new contracts. If there's an economic downturn, the city would have to implement major cuts and layoffs.

Oakland's police officers and firefighters won't be striking this week. The police union's contract runs until June 2019. The firefighters contract is expired, and theyr'e currently negotiating with the city, but while they've expressed frustration about how bargaining is going, unlike the other unions, they aren't allowed to walk off the job.


Affordable housing impact fees: Since September 2016, Oakland has charged developers housing impact fees when they pull residential building permits for market-rate projects. That means developers pay a fee to build condos, apartments, and single-family homes. The fees currently range from $0 to $12,500 — depending on the type of housing unit being built, and where it's located in Oakland, and the money raised goes into a fund that finances affordable housing projects. The fees are scheduled to increase to $8,000 to $23,000 in July 2020.

Over the past year, the fee has raised $477,824. The fees have yet to generate more funds for two reasons: The council decided to stagger the implementation of the fees over three years, and developers don't have to pay the the entire fee immediately. Rather, Oakland, like other cities, collects half the fee when it issues a building permit. The other half is due only when a certificate of occupancy is issued for the assessed unit, meaning it's finished.

Also, some major projects across Oakland involve development agreements with the city that have locked in vested rights, meaning that the fees don't apply.

Furthermore, the fees currently don't apply in much of the city because Oakland was divided into three zones. Fees in Zone 3, which covers most of East Oakland's flatlands, don't kick in until July 2018.

As a result, Oakland has assessed $7.7 million in affordable housing impact fees, but only collected on about 6 percent so far. The rest of the fees won't arrive until next year or the year after, according to the city administrator.