The votes cannot derail the stadium project on their own, but they put pro-stadium board members in a pickle. 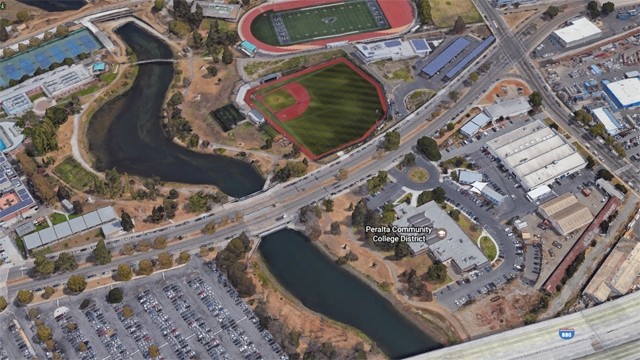 After being courted by the Oakland A's, the main teachers' union for the Peralta Community College District voted to oppose the team's plans to build a ballpark next to Laney College. The Peralta Federation of Teachers represents more than 1,000 teachers and faculty at all four of the district's community colleges.

The colleges are Laney, Berkeley City College, Merritt College, and the College of Alameda.

The site of the proposed ballpark, 5th Avenue and East 8th street, is a short walk from Laney. It is owned by the Peralta district and is being used as its district headquarters.

The vote cannot derail the stadium project on its own, but it puts pro-stadium board members in a pickle. In order to begin negotiations, the A's need to gain the approval of the district's board of trustees, who now risk alienating the district's faculty.

In addition, the Associated Students of Laney College, the student governing body at Laney, and the Laney College Faculty Senate also voted to oppose the Athletics' plans.

While a poll released in early November by the Oakland Chamber of Commerce suggested the ballpark had the support of city voters, the A's have not had the same reception from the community colleges. Since the A’s expressed interest in the site, many school groups have come out against the stadium.

“Laney won’t survive with a ballpark next to it,” said Keith Welch, president of the Associated Students of Laney College. “It simply won’t.” Welch, like many of the opposition leaders, sited traffic, noise, construction, and gentrification as concerns for placing a stadium next to Laney.

The union’s vote is a loss for A’s President Dave Kaval, who has been courting Peralta students and faculty. Prior to the vote, which happened on November 16, Kaval participated in faculty forums at each of the districts community colleges, taking questions from teachers and students and advocating for the benefits of partnering with the A’s.

Kaval touted student work connections and additional revenue sources as reasons the stadium would benefit Peralta, as well as Laney.

The union’s decision to oppose the ballpark was based on a survey of its teachers and faculty, according to Jennifer Shanoski, president of Peralta Federation of Teachers Local 1603. Shanoski said that the union, “would be advocating against the stadium,” by appealing to board members and attempting to sway them from supporting any future votes for the stadium.

“The majority of faculty were against the stadium and it was not isolated to Laney College,” said Shanoski.  “It was across all four colleges.”

The Peralta Board of Trustees will meet next on Dec. 12, though it is unclear whether any vote for the stadium will take place on that day.