October 10, 2017
5 comments
Four months after a community activist was killed in a hit-and-run crash near Lake Merritt, Oakland transportation officials announced Tuesday a new plan for how to improve the safety of dangerous intersections more quickly.

On June 2, 68-year-old Robert Bennett, a nonprofit founder who advocated for juvenile justice and mental health policy reform, was struck and killed while in the crosswalk at the intersection of Harrison and 23rd streets in the city's Uptown district.

Traditionally, the city of Oakland has tried to approach similar tragedies with significant infrastructure changes to streets that often require major construction and can take years to complete, according to city  spokesperson Sean Maher. But at the Harrison and 23rd streets intersection, the Oakland Department of Transportation used a simple paint job to widen the median, create a bike lane, and make the crosswalk larger and more visible.

The street improvement was completed in about 10 weeks and cost around $30,000, Maher said. Since the renovation, there’s been an 86 percent increase in drivers stopping for pedestrians in the crosswalk, according to the Oakland Department of Transportation.

“We’re not going to stick to the old processes where took five years to get anything done,” Maher said. 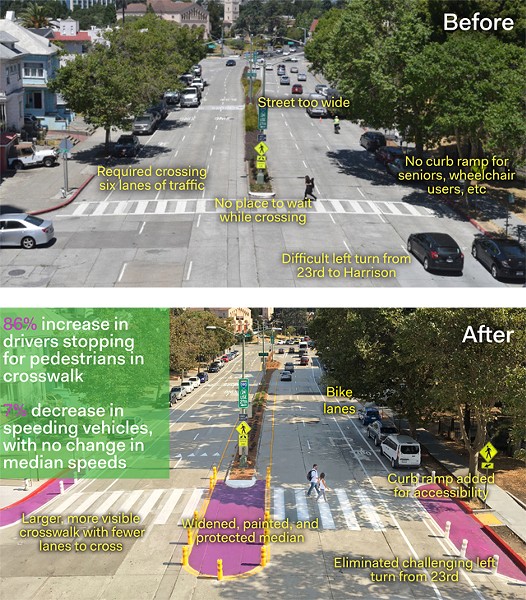 According to a city press release, Oakland’s transportation department aims to continue these implementing these quick fixes that can prevent vehicles from speeding or failing to stop for pedestrians — the two issues that lead to the most traffic deaths nationwide.

A 2017 report from Oakland’s Department of Transportation found that more than a third of the city’s pedestrian injuries and deaths occur on just 2 percent of Oakland streets. The city hopes to begin improving some of these high-risk corridors with upcoming road safety projects at the intersection of 8th and Fallon Streets in West Oakland and Fruitvale Avenue in the Fruitvale district, the press release stated. The city also noted that adding bike lanes helps to slow down traffic.

Alvin Lester, co-founder of the advocacy group San Francisco Bay Area Families for Safe Streets, said he thinks that Oakland’s new strategy is a step in the right direction.

“These improvements will save lives, immediately and in the long run,” said Lester, who lost his only son a fatal traffic accident. “Nobody wants to get a call that says their loved one has been over and killed.”